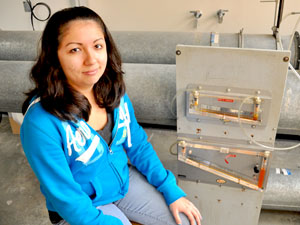 “I see the bolts and hinges that hold the door in position and I think about all the x, y and z reaction forces that those parts need to exert in order for the door to stay stationary,” she said.

At the age of 20, Flores is a fifth-year mechanical engineering student. She graduated from high school at 16, attended Moorpark College, transferred to UC San Diego to pursue aerospace engineering, and then came to CSUN in the fall of 2011.

Because of her studies in this field, she pays more attention than most to how things function.

“Have you ever thought about how a microwave works? It even amazes me how complicated things are that we use everyday like it’s nothing,” she said. “You just push a button and it works. Someone had to invent it.”

Flores has always had a knack for science and math and holds an interest in robotics. She didn’t always know she wanted to pursue mechanical engineering, but her brother-in-law graduated from CSUN in the field.

“I guess him doing it pushed me in that direction,” she said.

For most of the week, Flores spends 12 hours a day on campus. She spends the bulk of her time in the computer lab at Jacaranda Hall and in class. And in between, she grabs lunch with her engineering peers.

In addition to the time she spends in class and studying at CSUN, she also volunteered to develop a human powered vehicle, one of the four senior design projects for mechanical engineering students. The vehicle is a bike that is designed, analyzed, finalized and produced by these students, Flores said.

The bike will be entered in a competition hosted by the American Society of Mechanical Engineers in April.

After attaining her bachelor’s degree, Flores hopes to attend grad school at CSUN or UCLA. Someday, she would like to work on stealth and fighter planes in the military.

Outside of class, Flores serves as the webmaster for the university’s chapter of the American Society of Mechanical Engineers, and is involved with the Society of Hispanic Professional Engineers.

“I get frustrated sometimes when I see my friends who have more time than I do hanging out, and I’m stuck doing homework and studying for midterms, but at the end I hope it’ll work out,” she said.

Because she spends much of her time with other engineering students, most of Flores’ friends come from that field.

“We see engineering in everything we look at. We’ll see buildings and we’ll comment on stuff, or we’ll see bolts on things and we comment on the size of the bolts, or how a chair could be made more efficiently,” she said.

The devices and networks enabling human communication are also aspects of the world Flores finds interesting.

“I’m fascinated by the way the Internet works and how something that we can’t physically touch works so that we can communicate and share things all around the world,” she said.

And when it comes to cell phones and computers, she thinks about the little pieces inside that allow them to serve as communication devices.

“I think about the circuit board that is inside the phone or computer and wonder what kind of components it is made out of: resistors, capacitors, inductors, op-amps,” she said.

Along with paying close attention to how things work, Flores’ perspective on decision-making has been influenced by her studies in mechanical engineering.

“I think most engineers are really logical as opposed to using their emotions to make decisions in life. It’s just present in all our classes, to do things the logical way as opposed to what you feel,” she said.