Archery club expands, gets a new home on CSUN campus 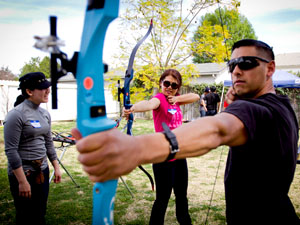 CORRECTION: The archery club was described as having been approved to receive an on-campus shooting range. The “range,” or practice field, received endorsement by the Risk Management department, the facilities manager and the CSUN Police Department. It did not receive official approval, as stated in the article. The field is still in the process of being reviewed and will soon reach the approval process by the university. Additionally, June Montenegro was referenced as “Montegro,” and his correct name is “Montenegro.”

After insisting they have a shooting range on campus for four years, the CSUN archery club will now have their own one on the north field of campus between Redwood Hall and the CSUN dorms after its approval the first weekend of March.

Raymond Paguia, 23, archery state champion started the CSUN archery club in 2008 and had been asking for a shooting range on campus since the inception of the club.

“I hope they can see the benefits for the school and the team” Paguia said. “It will benefit CSUN and the community.”

Easton, a company that makes sports equipment, offered to fund the construction of a shooting range completely free for CSUN and worked with the university to find the best location.

“We are passionate and want to spread the sport. It’s a great sport that anyone can practice, regardless of their body type,” said Don Rabska, vice president of the Easton Foundation.

“It just takes time, it isn’t anyones fault,” Rabska said. “They are great to work with.”

June Montegro, archery club coach and archery world champion in 2000, said he is already applying to see if Easton would give them more equipment since they have such high demand of new interested future members.

David Crandall, A.S. general manager, said it was not up to A.S. to approve the request for a shooting range. They have not denied any requests but were working with the CSUN Police Department and the risk management department to bring one to the CSUN campus.

The decision was left to the CSUN cabinet.

“There are issues of safety. Our staff has been working to see if they can open a range in the north side of campus,” Crandall said.

“There will be a schedule, and only club members are allowed,” Montenegro said. “Crossbow will not be allowed and neither will uncertified equipment.”

Paguia, who graduated from CSUN in Fall 2012, said since the emergence of the club, they were forced to practice in a public park where it became dangerous to practice.

Paguia said he had been talking to John Paul Gale, the sports club coordinator for the clubs on campus, to open a shooting range since they started, but it did not happen immediately.

Club practice used to be held at Woodley Park which is about seven miles away from campus. Claire Plauzoles, 20, president of the CSUN archery club, said that practicing at that shooting range was jeopardizing the safety of CSUN students.

Woodley Park was catering to over 200 archers per day. Since it is a public park, no one can reserve the park for practice, and the only place left to shoot was next to the archers shooting at the longest distance possible. Students had arrows flying by just three feet away.

After that problem, Montegro opened the doors of his backyard to welcome the club to practice.

“These are straight-A students that enjoy the sport,” said Montegro, adding that students used to ride their scooters to Woodley Park and to his house for practice. He added that he was excited to finally be able to practice on the university’s campus.

Plauzoles said said during the Meet the Clubs event, they had 280 new interested members who wanted to join the archery club, which currently has 27 members. The club split the interested students into groups and has started working with the first 60 students.