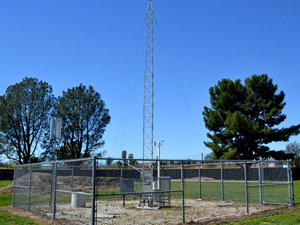 Just east of the baseball field sits a tall, yet unassuming metal structure. The fenced in slender tower looks like it couldn’t be much, but looks can be deceiving. That tower is CSUN’s very own weather station operated by the geography department.

This information is recorded by the weather station’s automated system every 15 minutes. That data is then sent over to the National Weather Service.

“The data we get from the station ends up in the hourly weather roundup,” said Mike Wofford, senior forecaster at the Los Angeles/Oxnard branch of the National Weather Service. “(That) is a listing of weather stations in and around Southern California, but mostly focusing on our forecasting area which covers LA, Ventura, Santa Barbara, and San Luis Obispo counties.”

This information in the hourly round up is typically used by local press outlets to create their weather reports. When Northridge information is seen on local news weather segments, that often comes from CSUN.

“During strong wind events like Santa Anas we usually issue wind summaries every few hours summarizing the strongest winds across the area,” Wofford said. “Northridge tends to be a windy place during Santa Ana’s so you will occasionally find (CSUN’s) station listed there.”

Similarly, information regarding humidity trends is used to help in fire weather forecasting, and precipitation data is used during major rain fall events.

CSUN’s weather station has been operating for more than 50 years.

“CSUN has had a weather station since around the 1950s,” Boyle said. “In the old days they had to take these weather observations down by hand, but now it’s all automated.”

Dr. William Bowen, former geography department chair, said he helped switch the station to an automated system in the ’80s.

“I was asked by the department chairperson at the time to take on the task of completely rebuilding the system and modernizing it,” Bowen said. “I did that using modern digital computers linked to weather instruments on a tall tower atop the Sierra building complex.”

This modernization helped the station take fewer resources to operate.

“The station itself runs on a 12-volt battery,” Boyle said. “The networking router that sends out the weather station data needs more power than the station.”

The station also has become so self-sufficient that it no longer needs paid student workers to help maintain it.

“We haven’t had student workers since the ’80s,” Boyle said.

Students do still interact with the weather station, however, by helping with the maintenance and programming of the stationthrough the geography department’s climatology courses.