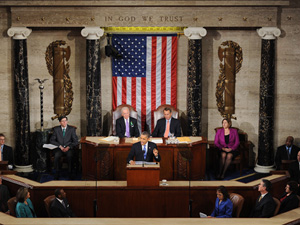 Twelve days have passed since President Barack Obama officially signed the Sequestration Order for Fiscal Year 2013 on the evening of March 1.

The $85 billion worth of immediate cuts to the federal government, a “doomsday” policy created by congress and the president as part of the Budget Control Act of 2011, were initially delayed from Jan. 1 to March 1 by the American Taxpayer Relief Act of 2012 to give congress and the Obama administration more time to legislate an alternative strategy to decrease the federal budget.

No resolution was reached and congress must now make these cuts in the next seven months, according to the White House.

The Congressional Budget Office will decrease spending on domestic programs and the defense budget by $42.7 billion each, resulting in little more than $85 billion. The American Taxpayer Relief Act of 2012 had decreased the sequester from its $1.2 trillion price tag by $24 billion.

According to a February report by the White House Office of Management and Budget (OMB), discretionary domestic spending, which includes the budget for the federal Department of Education, will be decreased by 5.3 percent, amounting to $28.7 billion. The defense budget will be cut by 7.9 percent, excluding cuts to active military personnel.

However, since sequestration was pushed until March 1 and the Fiscal Year (FY) 2013 starts on Oct. 1, cuts must be administered over seven months instead of 12 months. The OMB sent a report to congress on March 1 explaining that the shorter time period will increase the real percentages of cuts to 9 percent for non-defense programs and 13 percent for defense programs.

According a White House fact sheet on the sequester’s projected impacts on education in California, about 9,600 fewer low-income students would receive financial aid due to cuts to the Federal Supplemental Educational Opportunity Grant (FSEOG) and around 3,690 fewer students obtain employment due to the cuts to the Federal Work Study (FWS) program.

However, another state-by-state report published Feb. 5 by the National Education Association stated that while funding to the FSEOG would decrease to almost $4 million, up to 169,420 students could be affected. FWS would be decreased by a little more than $5 million and affect 60,780 students.

Federal Pell grants and loans are protected from the discretionary funding sequester, but federal student loan origination fees would be raised by 5.1 percent to offset that protection. Undergraduate Stafford loans will be raised from the current 1 percent to 1.051 percent.

Lili Vidal, director of the financial aid and scholarship department, previously told the Sundial that sequestration would cut funds from FSEOG and FWS funding for the 2012-13 school year. However, Vidal said in an email that the sequestration will not affect FWS programs until 2013-14.

“We expect that our tentative funding that we have already received notice of will be cut by approximately 5.1 percent,” said Vidal. “The possible good news is that our tentative allocations for these programs were increased for 2013-14 and the sequestration cut may still leave us a little ahead of the 2012-13 allocation we received this year. But nothing is known for sure until we receive our final allocation for 2013-14 and no one knows when that will be.”

Vidal said that as usual, her office will include language in award notices warning students that their financial aid may be reduced if federal, state or institutional funding levels change.

According to the White House fact sheet, the state’s K-12 public schools will lose $87.6 million in funding and around 1,210 teacher and aide jobs would be put at risk.

The fact sheet stated that “187,000 fewer students would be served and approximately 320 fewer schools would receive funding.”

California’s Head Start and Early Head Start programs, a federal program which provides education and resources for low-income children under the age of five, would be out of reach for about 8,200 children in California.

The NEA estimated reductions in California’s K-12 spending would affect about 179,000 students and present only 848 potential job losses. The report stated that while Head Start programs would see a $49 million funding loss, only 5,330 students would be affected.

The report highlighted that nearly $63 million would be cut to special education funding, affecting almost 31,000 students.

According to Los Angeles Unified School District spokesperson, Monica Carazo, LAUSD has no definite strategy yet for administering budget cuts, but said that the decrease in funding will hurt schools in the highest need and low poverty areas.

Carazo did not name any specific schools who serve these areas. The school district is one of the largest in the nation, spanning across 710 square miles, and receives about $1 billion in federal funding every year according to Carazo.

She said that LAUSD’s budget has to be presented to the Los Angeles County Office of Education by May and the district hopes that the sequester will be reversed or changed before then.

“There has been no mention about cutting teachers in the 2013-14 year,” said Carazo. “We hope it doesn’t come to that.”