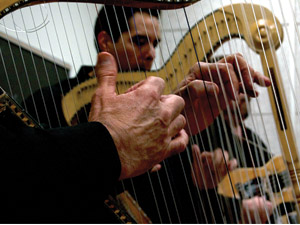 At the age of 26, Fermín Herrera witnessed Andrés Huesca play the harp in a 1940s film. From that day, Herrera knew he wanted to master the jarocho harp, a unique instrument from the southern region of Veracruz, Mexico.

“It’s the energy he played with, the conviction, the security, the strength,” said Herrera, a Chicano/a studies professor at CSUN, about Huesca’s talent.

Herrera plays the jarocho harp with his family band Conjunto Hueyapan. The band was founded in 1973 and originally from Oxnard, consisting of his two brothers, sister and two of his sons. They perform jarocho music, a genre also from the southern region of Veracruz. His son Xocoyotzin Herrera and his sister Maria Isabel Herrera also teach at CSUN and are part of the ensemble.

Early on, Herrera learned from Robert Murillo and Gollo Gutierrez, who were harpists from East Los Angeles. He continued his musical journey with lessons in Veracruz. Later, he had the opportunity to perform with well know musicians like Jaguares and Linda Ronstadt.

Learning has always come naturally to Herrera. He graduated from UCLA, with a bachelor’s degree in Spanish language, and had interests in other languages. He is fluent in Spanish, English, Latin, Greek and Nahuatl, the native language of Mexico.

Herrera has been teaching at CSUN for 42 years. His courses include regional music of Mexico, Mesoamerican civilizations, Nahuatl language, culture and language of the barrio. He offers his students the opportunity to learn how to play jarocho music by givng free lessons to anyone who is interested.

“I’m doing what I always wanted to do,” Herrera said. “I’ll say that I have derived more benefit from my career as a teacher, than my students because I did it selfishly, it was for me.”

He said students need to have the desire to learn in order to succeed. In his classroom, he encourages his students to analyze the content on their own and then read the book to have a better understanding of the subject matter.

“Student, in English, means one who is eager for, which comes from the Latin word ‘studere,’” Herrera said. “Eager for what? Who knows. But in Nahuatl the word is ‘momachtiani,’ which means one who causes or enables himself to know – and I find great inspiration in that.”

He motivates his students to take classes just because they have the desire to learn about a new subject.