Who’s going to wear the hat? 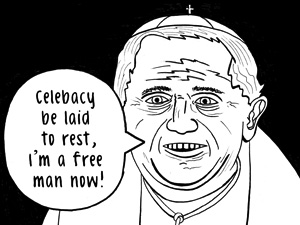 Maybe all roads do lead to Rome. So far this year, the Vatican and the Catholic Church have been hubs of newsworthy activity. Stories have ranged from the comic—a fake cardinal sneaking into the Sistine Chapel—to the tragic—Cardinal Mahoney shielding abusive priests in Los Angeles. But easily, the most important story is the unexpected resignation of Pope Benedict XVI itself, and the sudden need to elect a new pope.

Between balancing reform and tradition, and handling the growing exposure of abuse within the Church, whoever becomes pope will have quite a job on his hands. For the past couple thousand years, those hands have tended to be Italian, or at least European. However, this year the possible pontiffs include as many candidates from Italy as from other parts of the globe, Africa, North and South America, and Asia.

By selecting a pope from a non-European country, the Church would not only provide a pontificate that’s more representative of their worldwide congregation, but one that’s all the better to build bridges with an international community at a time when being globally conscious seems more important than ever. It’s an opportunity for an international pope, and more than that, it’s an opportunity for the Catholic Church to become a powerful force for global unity.

It’s an unusual opportunity, in a way. Historically the pope has not resigned, keeping his position until death. But then again, historically, out of the 266 that have led the Catholic Church, 205 popes came from Italy or Rome. That means about 70 percent of all popes have been Italian, with the rest largely rounded out by mainland Europeans; Mediterranean and African popes have been essentially confined to the first centuries of the Church’s history.

Although the 2005 papal election featured a pope hopeful from Nigeria, it was dominated by European possibilities and a smattering of Latin American choices. This year is a little different, and the media has taken note; the conclave of cardinals, the men who choose the next pope, should pay attention too.

The selection of a new pope is a mixture of tradition and strict social structure, part baroque ritual and part high school election. A group of cardinals meets in the Sistine Chapel in Rome, the same building that houses the legendary painted ceiling. The cardinals lock themselves in and silently cast ballots, for up to three days at a time, until they have chosen the new pope. The process can take anywhere from a couple of hours or days to weeks or, once in the late 1200s, three years. Moreover, a two-thirds majority is needed to elect a pope.

Perhaps the most iconic image of the selection process is that of the chimney, installed just for the papal election, which spews two shades of smoke: black for no decision, and ultimately white to signal a new pope has been chosen.

Popes are generally chosen based on their age, life experiences, personality and their positions on issues that face the Catholic Church today. Another factor that is considered is the electors’ nationality, which is becoming increasingly important.

Whatever your image of a Catholic is, you might consider changing it. The Catholic Church is growing; recently, the number of Catholics worldwide had increased from 1.181 billion in 2009 to 1.196 billion in 2012. Naturally, this can’t all be coming from Rome. Growth in Africa was significant, up almost two percent. And as of 2010, the Philippines was the third largest Catholic country in the world, right behind Brazil and Mexico, with over 75-million faithful. Also, growing numbers of Catholics entering the clergy are coming from Africa and Southeast Asia. It’s a trend that is even more obvious when you look at the numbers over the past century.

However, about half of Catholic cardinals live near Rome, and the majority of clergy are still in Europe, despite the fact that the number of Catholics on that continent have diminished noticeably. As Catholic demographics shift, it doesn’t seem sensible for the Church to be so European top heavy. More importantly, as more African and Asians enter the faith and the clergy, it starts to make sense that they should have more representation in the Church. To these Catholic faithful, Rome is seen as too far away to really have an impact on their lives. Traditionalists might argue that Rome has always been the center of the faith, and they have 2,000 years of history to back their opinions up. And, while statistics indicate that African and Asian populations are growing, a new pope from one of those continents would be too big a step. There has never even been a Latin America pope, and Latin America has been a very active part of the Catholic world for a long time; it is too far from Rome.

However, isolationism aside, there’s another element to this dilemma that suggests an international pope wouldn’t just be the best thing for the Church, but for the entire world. While a non-European pope could help invigorate the Catholic Church worldwide, he could also serve as an agent for global unity.

In the second half of the 20th century, Pope John Paul II changed the way we view the papal office. He humanized it, playing a role as peacemaker in the politics of the day, and serving as a bridge between Catholicism and the other major religions of the world, improving relations between Catholics and Protestants, Jews, Muslims and Buddhists. Pope John Paul II seemed as much like a pope for the world as for the Catholic Church.

Although the office was once simply the spiritual leader of Catholics, the door has been opened for the pope to become a moral guide for all people. And, as the world continues towards globalization, it seems as though this is an important position to take. Naturally, at no point would the pope stop being the spiritual leader of the Catholic flock. But as an international figure, the pope would not simply reflect the changing face of Catholicism, but the changing face of humanity. He could serve as a global representative for the fights against hunger and poverty, and promote world peace and tolerance; an alternative international mediator, free from national ties or biases.

However, this means seeing the pope as more than the cardinal of Rome. A familiarity with travel, a charismatic personality, and an international understanding and appreciation would all be required. And as for a pope from the Philippines, Brazil, or even Canada—someone who has, by default, had the opportunity to experience different parts of the world and be in touch with its diverse people—that should not be too much to ask. It would require a pope with an interfaith approach as well as an international touch, but it’s possible. And there are many people who can do the job. Some of them are even in Rome now, having traveled far and seen much, waiting to decide who will wear the papal hat. It’s a worthwhile wait, and the whole world is watching.

Colin Newton is a broadcast journalism major who is minoring in religious studies.