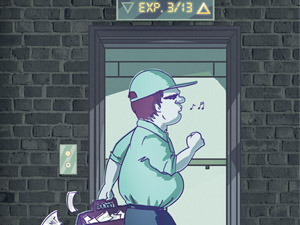 CLARIFICATION: In this article, Chet Galland was quoted as saying, “The response time is usually 30 minutes to an hour.” This was in reference to the elevator company, Amtech, and not to the CSUN Police Department, which may have not been clearly stated in the article.

Elevator riders might not know they could be standing in a code violation that would cost the university thousands of dollars, as expired permits are on display in many of the conveyors.

Peter Melton, spokesperson for Cal/DOSH said that CSUN could face fines of $1,000 per elevator if a valid safety permit is not posted in accordance with the Elevator Safety Orders outlined in Title 8.

Under Section 7320 of the Title 8 regulations, “(Cal/DOSH) may assess a civil penalty not to exceed $1,000 against any person owning or having custody, management, or control of the operation of a conveyance, who operates the conveyance without a permit or who fails to conspicuously post the permit in the conveyance.”

Although people may assume they are riding an unkempt, unchecked elevator, they may be surprised to find out the up-to-date permits are sitting in a binder instead of their proper display case.

Chet Galland, associate director of engineering services for Physical Plant Management, said the elevators are safe and the permits are up to date, and they are in the PPM office waiting to be placed.

Galland said the state regulations do not allow anybody but an approved elevator service technician from placing the permits in the elevators.

The elevator service technician is from an outside company, specifically Amtech Elevator Services, and is on campus five days a week.

Rob Manchester, the Amtech service technician dispatched to CSUN, acknowledged the new elevator permits and said he would get to them eventually.

“The permits go through three people before they get to me.” he said. “They’re going to be slowly put up.”

Melton also said since tools are typically required to open the window where the permits are placed, PPM is probably not allowed to use tools in the elevator.

“That’s why an elevator service technician has to do it,” Melton said.

Some of the permits have a temporary permit sticker placed on the elevator permit window which is placed there by the inspector. However, these stickers are not official permits and a fine could still result if the permanent permit is not put up.

According to the California Labor Code, Title 8 Section 3001, “No elevator shall be operated without a valid, current permit issued by the Division. The permit, or a copy thereof, to operate a passenger elevator, freight elevator or incline elevator shall be posted conspicuously and securely in the elevator car.”

Manchester was confident that neither the school nor Amtech would be fined.

“The elevators are all inspected,” he said. “There’s not going to be a fine.”

“Any fine that may be imposed would be a fine the university would pay,” Galland said. He went on to say that the state inspectors would not levy a fine right away.

“They would give us x-number of days to correct it,” Galland said.

Regardless of the expiration date inside the elevator, Galland stands by the safety of the elevators on campus.

“In the two years since I’ve been with Physical Plant, we’ve never had an elevator that was unsafe,” Galland said.

However, students have their own opinions.

CTVA sophomore Naimah Smith, 19, said the elevator in Sierra Hall makes some weird noises.
“It’s not a pleasant elevator ride,” she said. She also said she got stuck in the main elevator of the Oviatt Library.

“The doors wouldn’t open,” Smith said. “I got scared.”

Manchester said the lengthy process of issuing the permit was a factor in the delay, and he denied the fact that the permits in Sierra and Bayramian were expired.

According to Amtech, the company is “managed and operated by elevator experts. We have the technical expertise and proven ability to ensure proper maintenance of your elevator systems.”
As of Jan. 1, 2012, CSUN police officers have been dispatched 27 times to assist a person stuck in an elevator on campus according to Christina Villalobos, public information officer for CSUN PD.

She said that no particular elevator received more calls than others and that this number includes elevators in housing as well as parking structures.

Galland said elevators are inspected and certified once a year by the California Division of Occupational Safety and Health (Cal/DOSH). They send inspectors to the campus every year to issue new permits.

Permits are only good for a year. After that, a new inspection is required. If there is something that prevents the elevator from passing inspection, it must be fixed by the elevator service technician, not PPM, before the permit can be issued.

Galland said that if a student does get stuck in an elevator they should not panic. They can pick up a phone in the elevator or press the call button and they will be connected directly to the CSUN police department.

“The response time is usually 30 minutes to an hour,” he said. As far as elevators making strange sounds or doors not opening right away, Galland said all campus elevators are up to code.

“Every elevator has its own personality,” he added.

Before this article went to press, the Daily Sundial noticed that the Sierra and Bayramian Hall elevator permits were updated with the current ones.

Previously, the permits in those buildings showed expiration dates of Sept. 8, 2011, and Sept. 13, 2011. In the interview with Manchester, those two buildings were mentioned as having expired permits almost two years old. Manchester’s response was “I don’t think they’re that old.”

The next day, new permits were noticed in the elevators. However as of March 12, there were still expired permits in elevators in the USU. The Oviatt Library West permits were expired as of March 8 and updated by March 12. When asked about when these elevator permits would be placed, Manchester said, “Everything that was given to me was put up,” before adding, “I have no control over the elevators.”