Women’s Basketball: CSUN advances to second round with 61-40 win over UC Davis 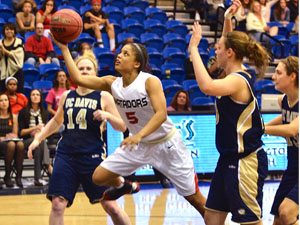 Irvine — CSUN’s (16-15) women’s basketball team advanced to the second round of the Big West Conference Tournament Tuesday night, defeating the seventh seed UC Davis Aggies (12-18) 61-40 in the first round, for their first postseason victory since 2009.

Producing one of their best offensive and defensive performances, the Matadors jumped out to a quick 8-2 lead that they would never lose, leading wire-to-wire.

Making 55.2 percent of their shots in the first half, Northridge came out firing on all cylinders, and were able to hold the Aggies to 28.6 percent shooting. That disparity allowed the Matadors to extend their lead in the first half to a high of 17 points.

“It’s not easy to play against Davis’ defense,” said senior forward Violet Alama, who led the Matadors in the first half with 10 points and three rebounds. “(The guards) just made good passes to the post and it was easy for (the forwards) to finish.”

At halftime, CSUN led 33-21, relying heavily on baskets in the paint, scoring 28 points for the game from the paint.

“Their defense is different from anything in the Big West,” said head coach Jason Flowers. “We made some slight adjustments; the best difference was (we) handled the pressure well. Our bigs finished in traffic a lot, and it was a team effort.”

Northridge had a loose night with the ball on offense, committing 19 turnovers, including 10 by sophomore guard Ashlee Guay, leading to 17 Davis points.

“We had some spurts where obviously we had a little more turnover than we’d like to,” Flowers said.

The once double digit lead was in danger for the Matadors as Davis turned up the heat in the second half.

Cutting the lead to eight on back-to-back turnovers by Guay with five minutes left, the Aggies were unable to get any closer.

“We talked about how last game we played a really good help defense as a team, and this time we came out knowing we could do that for each other,” Guay said. “We took charges, got the help for each other, scrambled out, overall talking and helping each other and playing defense that we are supposed to be playing and have been practicing.”

With sophomore guard Janae Sharpe’s suffering an injury with 10:52 left in the first half, Alama and Guay helped pick up the slack in Sharpe’s absence, pacing the Matadors with 14 points apiece. Four Matadors scored in double figures for the game.

“Like I told the team in the locker room, that was as well as we have played in a while and to do it against Davis and the program they have established,” Flowers said. “Our kids should feel good about it, we have respect for Davis. It’s a good win for us, but it means nothing tomorrow, we’ll let it soak in tomorrow.”

The Matadors learned from their mistakes in their January loss and February win against the Aggies.

“We made some slight adjustments, but the biggest thing was this young lady next to me (Guay) and the other guards who likewise handled the pressure pretty well,” Flowers said.