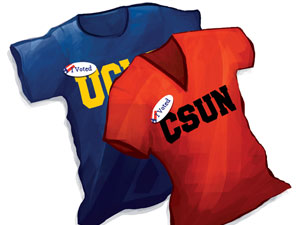 CLARIFICATION: A name has been changed to reflect Sen. Fran Pavley’s staff.

Two California senators have introduced legislation that would provide students at University of California, California State University and California community colleges with easier access to voting booths and polling places during elections.

Pavley, who graduated from CSUN in 1985 with a master’s degree in environmental planning, has introduced Senate Bill 267 to the state Senate in order to ensure that college students have access to polling places.

“As a former civics teacher, I know that engaging students in the democratic system of government is critically important,” Pavley said in a news release.

Local election officials currently have discretion in creating voting precincts and establishing polling places. SB 267 would require counties to designate UC, CSU, and California community college campuses with 1,000 or more students living on campus as their own elections precinct.

“SB 267 is all about making sure that students have access to the ballot box. My bill will give students convenient access to register and vote in future elections,” Pavley said in the release.

Junior childcare administration major Samantha Johnson, 21, likes SB 267 because it is geared toward out of state students.

“I think that’s the big key. I’ve met so many people from out of state and I think it would help them a great deal for national elections to have a polling place on campus. It would certainly help students who commute. My polling place is 45 minutes from the school. It would benefit me a lot and I would be more inclined to vote,” Johnson said.

In recent years, CSUN students have been fortunate in being provided a place to vote.

Janet Ohnishi, USU reservation and event services assistant, said that the Los Angeles County Registrar and Recorder’s Office has reserved a space in the Satellite Student Union for elections in 2006, 2008, 2010 and 2012. They have also reserved a space to facilitate voting for the May 21 mayoral run-off election.

If the bill passes, college students within the UC, CSU and community college campuses will not be financially responsible for the creation of these precincts and polling places.

Pavley’s staff said charging voters to vote would be unconstitutional and the polling places will come at no cost to students. The staff also said providing voting places is the responsibility of the county and the state may pay any cost that the passing of SB 267 may incur.

There is a competing bill up against Pavley’s SB 267.

Sen. Leland Yee (D-San Francisco/San Mateo) introduced Senate Bill 240 on Feb. 12, which would require at least one polling place on every UC and CSU campus. SB 240 would also encourage polling places on community college campuses, where there is an adequate demand for them.

Adam Keigwin, Yee’s chief of staff, said that the difference between Pavley’s bill and Yee’s will not establish college campuses as their own precinct. SB 240 will just demand at least one polling place on UC and CSU campuses.

Keigwin said that large campuses such as UCLA and CSUN should theoretically have more than one polling place.

“If you make it all one precinct it will only have one polling place. Ours will get more people involved in voting,” Keigwin said.

“I like the first one [SB 267] better because sometimes classes interfere with polling times and it’s more convenient to have it on campus for students,” said Christina Arredondo, 21, junior anthropology major.

Arredondo lives in Burbank and said that the bill would allow her to vote on campus instead of having to drive back to her own precinct to vote in elections.

Maclachlan said the difference between SB 240 and SB 267 is that Pavley’s SB 267 is directly aimed at getting students more involved in voting. The college campuses being made into precincts would exclusively be used by students.

Dr. Martin Saiz, chair of CSUN’s political science department, said that these bills are an example of an excellent way to potentially increase voter turnout among students.

“As a result, elected officials pay less attention to their needs,” Saiz added. “Thus, (the bills) should have a positive impact on the types of legislation that college students care about like lower fees, more financial aid, more classes and lower class sizes.”