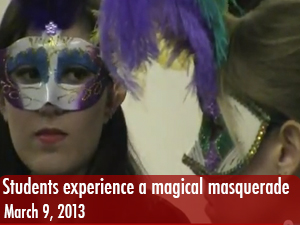 Students attended the Mystical Masquerade, a free magic show, which included a contortionist, dinner and magician Kevin Hurley, in the Northridge Center of the USU Friday.

The main act was magician and hypnotist Kevin Harley, who opened with some illusions, also known as “slight of hand” magic. He cut and put back together three pieces of rope, and had one audience member call a friend to ask what card he had upside-down in his deck.

After warming up, Hurley gathered 14 students on stage to hypnotize. However, he assured other audience members that they could also participate in their seats:

“If you can hear my voice and follow along, you can be hypnotized too,” Hurley said.

He put the students under a trance, and had them all go to sleep. They flopped over in their seats and rested on each others’ laps and shoulders as they fell deeper in a trance.

Hurley had the group sing, dance and pull some embarrassing stunts as the crowd laughed along. Some of the participants were under a stronger trance than others and were more active.

The center was highly decorated with tables covered in masks, beads and cupcakes. Guests ate and talked while trying on the different masks, trying to find one that suited their style.

A contortionist also performed on stage in a giant plastic bubble while guests dined on a free dinner of lasagna, pasta and salad.

Sherrina Lofton, who is currently working toward a master’s in career counseling, was on stage and stole the show near the end of the performance. Hurley had the contestants believe they were a part of a dance contest, which Lofton won.

Next, Hurley had Lofton dancing with the microphone stand, who she believed was an attractive man. Lofton had very little memory of the show afterward.

“I was getting super hot, I felt like the spotlight was one me,” she said. “It was fun! I remember feeling super tired before, and now I’m energized.”