Harlem Shake will be another dead trend 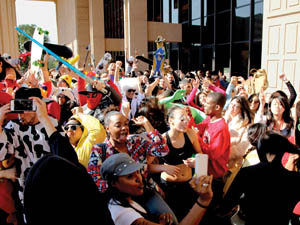 It all begins with one person who is usually wearing a helmet or a hat while everyone around is oblivious to that person dancing, until the beat drops and everyone appears to be dancing in a comical way; that is the Harlem Shake.

The song by Baauer, born as Harry Rodrigues, 23, reached first in iTunes singles chart and is currently third. The dance is being performed by fraternities, sports teams, TV shows casts and even CSUN.

CSUN CTVA major, Konrad Sedochenkoff organized the Harlem Shake that happened on campus and went on his bike around campus with a megaphone to get Matadors to join the CSUN Harlem Shake.

He also used social media like Facebook and Twitter to let students know about the event. He gathered about 150 people in front of the Oviatt Library on Feb. 19.

“It’s a way to have fun and represent your school and be part of that internet exploitation of fun in the internet,” said Sedochekoff. “We wanted to make sure that CSUN did not get left out.”

There are hundred of Harlem Shake videos including sports teams like the Miami Heat, Manchester City F.C., and the CONCACAF champions Sub-20 Mexico.

It wasn’t until the people of Harlem reacted to the shake and responded with disappointment and shame because they said that it doesn’t represent Harlem or the city of New York.

The real Harlem Shake requires you to move your shoulders up and down while you alternate between the left and right. You should move your arms side to side. People get creative with the dance but that is the basic Harlem shake.

Deana Momjian, 19, health administration major, said that everyone is doing it wrong because the real Harlem dance is actually difficult.

“It’s better than planking, it is not dangerous. I’ve seen people doing planking on the freeway and that’s dangerous. Doing the Harlem shake on campus at least shows school pride,” Momjian said.

But how long will this dance be trending? Remember Gangnam Style? The K-pop sensation that Psy brought to the world and now no one is doing. Or planking? When people would take pictures laying on the ground or on inappropriate places, that also has stopped. How long will the Harlem shake last? We are all waiting for the next YouTube video that makes everyone else on the globe imitate it.

Freshmen Kenny Pelaez, 18, predicts that the Harlem Shake will only last a couple of months before it dies down.

“Its not a dance, you just make crazy movements,” Pelaez said. “I was invited on the Facebook event but wasn’t able to go because I had class during that time. I would have gone if I could, though.”

Trends are fun to follow. There are several other trending topics that have happened. Planking’s nemesis, owling, which consists of someone keeping balance on an edge and posing in fetal position. Owling was also popular but eventually died down.

Tebowing was another trend that people were following. Someone would take a picture of a single person, or sometimes a group of people, who would kneel down on one knee and pretend to be praying like Tim Tebow commonly does.

Just like everything else in the world, it all has a beginning and an end. All cultural trends are ephemeral just like fashion; you have to keep moving with it.