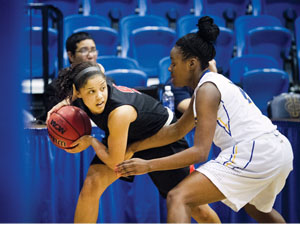 Irvine – CSUN’s women’s basketball team was eliminated in the second round of the Big West Conference Tournament Wednesday night against fourth seeded UC Santa Barbara (16-15) 45-31, recording their lowest point total of the season and in tournament history.

Despite winning the tipoff, Northridge (16-16) didn’t start strong offensively turning the ball over seconds into the game. Northridge never held the lead throughout the game, falling behind 4-0 at the start of the game.

Tying the game at 4, the Matadors would never again threaten against a well-rested Gauchos team. Playing without starting sophomore guard Janae Sharpe, who was injured in Tuesday’s first round win over UC Davis, the Matadors struggled to get the ball to the inside.

“We played with who was in uniform,” said head coach Jason Flowers We are a program that hasn’t made excuses and will never make excuses. We felt like that regardless who we had, we had enough to execute the game plan and do what we’re suppose to do. We don’t play the “what if” game.”

UCSB would hold their lead throughout the first with Northridge trailing by as much as nine.

Making 43.4 percent of their shots in the first half, the Gauchos capitalized on the Matadors 12 turnovers with six points and went into the locker room at the half leading 22-13.

“Losses are always tough, probably more so on coaches than the players,” Flowers said. “It is disappointing way to end our season for our three seniors, but at the same time our three seniors have done things in our women’s basketball program that have never been done at Cal State Northridge.”

Handling the ball better in the second half, CSUN would record one turnover, but failed to take advantage of the Gauchos 11, shooting 19.4 percent.

A three-pointer by UCSB junior guard Destini Mason with 15:59 left in the game would exceed the Gauchos lead to 12. A four point run by the Matadors would bring them within eight, but that would be the closest they would get in the second half.

The Matadors struggled offensively throughout the game, shooting 24 percent. Cold from behind the arc, Northridge failed to make a three-pointer all night going 0-12.

Extending their lead to a game-high 16 points, the Gauchos ran away with the second half and Northridge had no answer for UCSB junior forward Sweets Underwood who led both teams with 16 points.

The Matadors had no players in double figures with senior forward Violet Alama leading the team with nine points before fouling out with 3:39 left to play in the game.

The loss was Northridge’s third to UCSB this season and their 14th consecutive to the Gauchos.