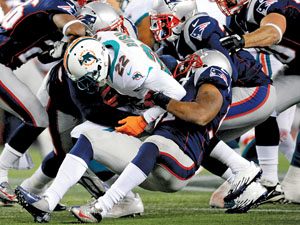 The Matt Cassel/Brady Quinn era that has haunted the Sundays of Chiefs fans everywhere is officially over. In comes former San Francisco 49ers quarterback, Alex Smith, who resurrected his career as of late and has become one of the most consistent and error-free quarterbacks in the league. The Chiefs gave Smith a lot of toys to play as they bolstered their receiving core by adding Colts wide receiver Donnie Avery as well as signing pro-bowl wide receiver Dwayne Bowe to a long-term deal.  Kansas City also improved their secondary by signing Sean Smith from the Miami Dolphins and Dunta Robinson from the Atlanta Falcons. Although they are not big name free agents, they significantly improve their secondary, which allowed 220.8 yards per game last year through the air. After finishing 2-14 last year, there is no way to go but up for the Chiefs.

Sometimes you just have so much money lying around, it’s hard to figure what to do with it. Well, Jeff Ireland, general manager of the Miami Dolphins, decided to drop $60 million on former Pittsburgh Steelers wide receiver, Mike Wallace. The one-dimensional speedster will be working with a shaky second-year quarterback in Ryan Tannehill and a rushing attack that just lost starting runningback Reggie Bush to the Detroit Lions. With lack of a running game and no receiving threats surrounding Wallace, it will be easy for opposing teams to defend the Dolphins and their long-bomb happy offense. Did I mention their defense is awful? Miami will once again be looking up to the big bad New England Patriots in the AFC East.

The Detroit Lions had the most notable free agent as they signed dynamic running back Reggie Bush who flourished previously with the Dolphins. He fits perfectly in the Lions’ offense as he can catch out of the backfield and is ridiculous in the open- ield as he makes defenders miss and has the elusiveness to break off long runs. He doesn’t have the durability or the frame to be a every down back, but when you have the best receiver in the league in Calvin Johnson, it adds balance and allows for both stars to succeed in a high-tempo offense.
Loser – Baltimore Ravens

You just won the Super Bowl, what are you going to do next? Well the management team for the Baltimore Ravens thought that they would let two young up and coming linebackers in Daniel Ellerbe and Paul Kruger walk away in free agency as well as trade Anquan Boldin, their veteran receiver, walk to the very team they beat in the Super Bowl. With Ray Lewis retiring, the Ravens have lost their veteran leadership as well as the talent needed to repeat. Joe Flacco needs to step into a leadership role and put his money where his mouth is, all $120 million of it.