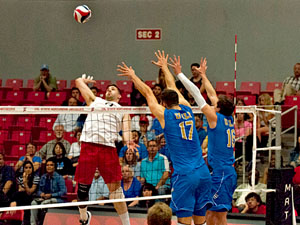 Despite holding a 2-1 set lead against the visiting fifth-ranked Bruins Friday night, the Matadors (10-8, 8-8 MPSF) allowed UCLA to mount a comeback and win the final two frames of the match by a combined 17 points.

Though they committed over 10 errors in the first set, the Matadors stayed strong and finished the Bruins when Lebrock struck down a kill set by sophomore setter Travis Magorien, who finished the game with 43 assists.

Baker led all Matadors in kills for the night, tallying 15 on a .250 hitting percentage while Lebrock put down 11 on .194. Senior middle blocker Drew Staker contributed to CSUN’s offense as well, striking down a season-high 10 kills on an impressive .600 percentage. On the Bruins side, junior outside hitter Gonzalo Quiroga had 22 kills on .576.

Dropping the second set by six and winning the third by three, Northridge couldn’t keep its momentum going as the they scored just 23 points in the last two sets combined. In the fourth set, CSUN hit an abysmal – .100 while the Bruins hit .600 as UCLA took the set with a commanding score of 25-13.

Defensively, the Matadors couldn’t find a way to stop their opponents after the first set as UCLA hit .448 throughout the match compared to Northridge’s .280. CSUN managed 32 digs (nine by freshman outside hitter Sam Holt, who led Northridge), but ultimately succumbed to the Bruins, allowing 66 kills.

UCLA dialed up the pressure in the fifth and final set, hitting a blazing .786, and won 15-10. This match marks CSUN’s second loss to the Bruins on the season, the first being on Northridge’s season opening night on the road where they nearly surmounted a 2-1 set lead by UCLA.