College students are losers in the game of student loan debt 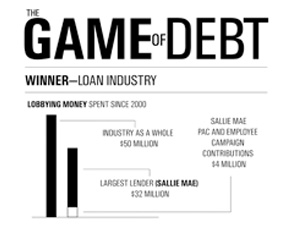 It has been proclaimed that this piece of paper is the pathway to a richer life. The ‘American dream’ can be realized; securing a well paying job, buying a house and accumulating savings.

But this is far from the truth. In fact, this piece of paper, a college degree, is increasingly becoming a path to a lifelong servitude to debt for many college students. And this is not by choice.

As the higher education system has dramatically changed to become a profit-oriented business. The meaning of earning a degree has been reshaped to benefit the few while hurting students. Not only are students trapped in a vicious cycle of life-long debts when leaving school, they also need to face a reality of underemployment and stagnated wages.

However, most leaders in this country fail to realize that by making students slaves to yet another debt system, they are hurting our capitalistic society. It cannot and will not survive without good customers who regularly posses the credit or capital to consume.

Student loans are not a financial epidemic that only have a micro level impact. This perpetual cycle will slowly demolish this nation as a whole.

In 2010, President Obama addressed the issue of student loans and stated that “no one should go broke because they chose to go to college.” Yet, the president has not only made it easier to take out student loans, but also continues to neglect the issue, a political rationale heavily influenced by lobbying efforts of related parties, the winners in this exploitative cycle.

The student loan industry has had a disproportionate impact on how the future for a college student should play out. They have spent prodigious time and money to make sure that their envisioned future of indebted fellow citizens continues to be highly profitable.

A 2012 report by Public Campaign, a nonpartisan organization, show that since 2000, the student loan industry has spent more than $50 million on lobbying to advance their interests. The biggest private student loan provider Sallie Mae (SLM) has spent more than $32 million lobbying since 2000 and “its PAC and employees have given almost $4 million in campaign contributions during the same period.” Without any doubt, the hard work of lobbying is certainly paying off for the industry.

According to the 2012 report by the Consumer Financial Protection Bureau, the student loan debt has now hit the one trillion dollar mark. Unlike “other consumers credit products, student debt keeps growing at a steady clip.” Consequently, the outstanding student loan balance has now surpassed the total credit card balance and the total auto loan balance.

More than 20 million Americans attend college each year and close to 12 million, or 60 percent, borrow annually to help cover the cost that continues to rise. The younger generation whom we supposedly invest in to become the next productive members of our society, are instead becoming the lost, barren generation.

The 2012 report by the Federal Reserve Bank of New York shows that among people under 30, more than 40 percent have outstanding student loan debt and almost $580 billion of the debt total is owed by people younger than 40. Perhaps more importantly, more than $80 billion of the outstanding debt is past due and unlike credit card debt or car loans, bankruptcy can rarely, if ever, be utilized by those who struggle to pay back student loans to clear their outstanding debt.

This has not always been the case.

Before the bankruptcy code was significantly altered, college students were able to discharge their educational loans, but after 1976, this came to an end. That year, Congress changed the code so that loans made by the government or a non-profit college loan could not be filed for bankruptcy during the first years of repayment. However, the biggest change came in 2005 when Congress passed the Bankruptcy Abuse Prevention and Consumer Protection Act which rendered federal or private loans ineligible for bankruptcy, a law that groups student loans with other ineligible debt such as child support and criminal fines. Lobbying certainly pays off. In fact, now you have a better chance to file for bankruptcy for gambling than with student loans.

But why are borrowers having such difficulty in paying back their loans?

Undoubtedly, most people enroll in college because they presume that the golden key to a better future is a college degree. We are constantly told that without a college degree, one’s future can only be condemned. Like most leaders, Obama has constantly employed education as a political focal point. Through speeches and his administration through policy have stressed that higher education is “the prerequisite for the growing jobs of the new economy.”

However, the younger generation are not only being punished for trying to succeed in life, but they have to face a job-market where the “growing” job opportunity ends in underemployment and unsustainable wages that can barely pay the rent, let alone the principal on student loans.

A 2013 report by the Center for College Affordability and Productivity explicate that almost 50 percent of employed U.S. college graduates are currently working in jobs that the Bureau of Labor Statistics (BLS) say requires less than a four-year college degree. Furthermore, about five million college graduates are in jobs that require less than a high-school education.

Although we tend to see student loans as an individual issue, it’s imperative to remember that this is a burden that undoubtedly forestalls things such as auto and home purchases, industries that can create jobs and spur further economic growth.

According to the 2012 report “Denied? The Impact of Student Debt on the Ability to Buy a House” by the youth advocacy group Young Invincible, “the average single debtor will likely be ineligible for the typical home mortgage due to their debt-to-income ratio.” The report also show that the future is equally grim for couples looking to buy a house if both buyers have student debt. But student loans also have a long-lasting effect that is increasingly becoming a hardship for the family as a whole.

In 2000, there were only six cases in which the federal government withheld money from Social Security recipients who had fallen behind their on their federal student loans. In 2012, that number had grown exponentially when the “government reduced the size of roughly 115,000 retirees Social Security checks on those grounds,” according to Wall Street Journal.

Sadly, many retirees are not even indebted for their own education. Some borrowers went into debt later in life to cover education cost for their children or other family members.

Thomas Jefferson once said “the end of democracy and the defeat of the American revolution will occur when government falls into the hands of lending institutions and moneyed incorporations.” Little did Jefferson know that he had predicted the future of this country. If a society cannot foster a well-educated population that perceives higher education as an investment, how can this nation ever progress? In the end, everyone will lose if this country continues to take the same irrational path with higher learning.