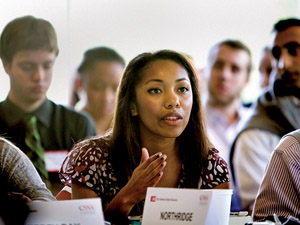 Student representatives from across the state congregated for the California State Student Association (CSSA) Conference, hosted by CSUN Associated Students in the Colleague’s Room of the Sierra Center on Saturday.

CSUN had to apply and go through a selection process in order to host the conference. Northridge last hosted a CSSA conference six years ago. Paige Andrews, chief of staff for A.S., and a panel of other students and faculty helped organize the weekend-long event.

“I’m a senior, so this was my last big event to help with. It’s a huge honor to host here at Northridge,” Andrews said.

The monthly meeting comprised 23 A.S. presidents and school representatives, who discussed a number of issues pertaining to individual universities and CSSA.

Four committees met for discussions on Saturday afternoon. The Legislative Affairs committee took a big step, establishing CSSA’s official stances on 25 bills concerning higher education. Out of the those presented, 21 were given official support.

Among the bills viewed, Assembly Bill 386 brought about the most discussion. The bill proposes online cross-enrollment between all CSUs. A similar system already exists, but this would streamline the process and make it a process completely online.

After committee meetings, round-table discussions were held to talk about a system-wide smoking ban, elections procedures and campus-based student fees. Any member could go to either discussion.

CSUN’s Elections Chair Breanna Kyle attended the discussion about student elections. The colleges present asked each other about group and club endorsements of candidates.

According to election guidelines for CSUN, the rules do not allow groups to openly market what clubs or organizations support them, but they are allowed to take donations.

“Clubs can endorse someone and give them finances, but everything has to be documented,” Kyle said. “It holds everyone accountable and provides a paper trail for us to follow.”

CSUN Candidates also have to abide by a spending limit. A slate of candidates can only spend $1,000, $500 for a president and for a vice president to share a ticket, and $500 for any individual. However, Kyle said there has been talk of throwing out the limit.

“In real life there’s no spending limit, like in Mitt Romney’s campaign against Barack Obama,” she said, “But the point is to keep everything fair.”

The conference will wrap up Sunday morning, after breakfast and more meetings in the USU, to finalize all decisions made.

“This has to be one of the most organized CSSAs that I’ve ever been to!” said David Allison, president of CSSA.

“A lot has been accomplished. Some of the stuff we talked about today has rolled over from previous months,” Powell said.