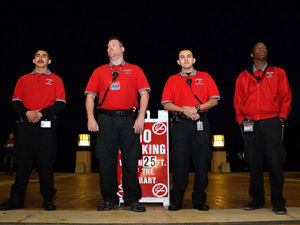 During the day at CSUN, thousands of students hustle on walkways lit by the Southern California sun. At night, however, walking around campus in the dark can be a different experience.

For those who find the night version of campus disconcerting, there’s a service for students, staff, and faculty members who rather not wander the campus alone.

With the possibility of increased danger in the Northridge area, CSUN students said they are glad this service exists.

“With things like the Christopher Dorner sighting in the area, I’d think about using the safety escort more,” said Gauri Kuwadekar, a sophomore undeclared major. “I would probably use (the Matador Patrol) if on campus late at night.”

The Matador Patrol is a group of 30 student Community Service Assistants (CSAs) who provide safety escorts to and from any location on campus from dusk to 11 p.m., Monday through Thursday.

Marie Takakura, a senior biology major, said the service helped alleviate her fears of walking alone in the dark.

“I used to get out of classes around 10 p.m. and I was scared of walking by myself,” Takakura said. “I saw a (safety escort) in front of the library and I didn’t have to walk across campus alone.”

While the safety escort is available for both men and women, many male CSUN students said they didn’t think they would use the service, like Tadeh Minasyan, a freshman business law major, who said he feels safe on campus.

In 2012 alone, the Matador Patrol provided 21,931 safety escorts. Of these, only 284 were calls into the police station to ask for a dispatched escort. The rest were impromptu, called solicited escorts, provided by CSAs stationed throughout campus locations such as the Oviatt Library and Student Recreation Center.

“While safety escorts are at the center of what the Patrol does, we provide so much more,” said Scott Vanscoy, captain of patrol operations, who oversees the Matador Patrol.

“There’s really no other place to go hang out in the Valley besides CSUN,” Vanscoy said. “This means we get a lot of people who aren’t part of the community coming in, and at times committing crimes.”

One area that needed assistance in crime prevention was student housing.

The Matador Patrol began assigning members to serve as guest registration assistants (GRAs). GRAs check in guests of students, allowing four per student resident. This helps the Department of Police Services know how many people are entering student housing and the names of each of those individuals.

The Matador Patrol also provides safety education resources for the CSUN community, with education efforts led by the student staff.

“Peer-to-peer education works a lot better than having a staff person come out and teach about these topics,” Vanscoy said.

Vanscoy said their sexual assault awareness campaign was one of their most successful peer-to-peer education efforts.

“We did these campaigns at night around the business education building where it’s really busy and over at the Sierra Center,” Vanscoy said. “We ended up handing out about 2,500 of these flashlights.”

While the Matador Patrol strives to make CSUN a safer place for the community at large, Vanscoy said he’s also implemented ways for patrol members to get practical real world experience that can boost their resumes regardless of their field of study.

The major way Vanscoy provides this experience is through internship programs with the Matador Patrol.

“I work with a particular department and show how they could take that field and make it work within the unit,” Vanscoy said. “If they were in accounting, they’d help me with the numbers, the hours, the payroll, and they would give me projections as to what I would need for the year. They would do a whole business plan in terms of finances and that is their internship.”

While the Matador Patrol now works in conjunction with the CSUN Department of Police Services, it began as an effort by the Greek community in 1978.

“A lot of activist groups were protesting in the ’70s, causing some students to feel unsafe walking alone,” Vanscoy said. “Members of fraternities came together to provide safety escorts to meet the needs of students who had evening classes and evening sports practice.”

The campus also wasn’t as well lit as it is today, causing additional anxiety for students who had to walk the campus alone, Vanscoy said.

The Matador Patrol came under the Department of Police Services in the early ’80s, when it became so popular that it was difficult for fraternities to keep up with the demands of the service.

“The Matador Patrol became too difficult for fraternities to manage,” Vanscoy said. “They didn’t have enough resources or funding, so the Associated Students came to the university and asked for the service to be continued under what was called the Department of Public Safety at the time.”

While the campus has 30 paid CSAs today, the Matador Patrol has had over a hundred members at one time in the past.

“The highest number we’ve had was right after the Northridge earthquake,” Vanscoy said. “We had 120 people.”

When Vanscoy took over the Matador Patrol in 2000, there were 80 CSAs in the group.

“We have shrunk for a few reasons,” Vanscoy said. “One is that the services we provide have changed. Professional guards do security work that would be unsafe for student guards to do. Another is funding. We haven’t had a funding increase in a while.”

“We were asked for help with CSA positions and bike repair to aid in increased escort activity from housing to the SRC,” said Diane Hartjen, accounting and financial services director of A.S. “We gave them $770 for bike repair and $8,320 toward CSA positions this year.”

Vanscoy said some of their services were paid for by the communities that benefit from specific programs.

For example, funds for guest registration assistants are provided by housing, and a federal grant for programs ending violence against women helped pay for the sexual assault awareness campaign.

No matter how much funding the program receives, the intention of the Matador Patrol has always been to focus on the students, Vanscoy said.

“This started as a program for student safety,” Vanscoy said. “We continue that today in addition to providing valuable work experience for all of the students involved with the Matador Patrol.”