‘Spring Breakers’ will have you hating or loving spring break 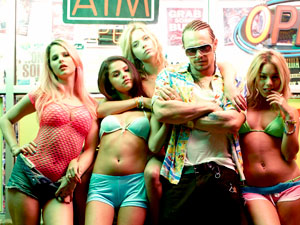 Director Harmony Korine said the point of  the film “Spring Breakers,” is to show audiences the debauchery of spring break. However, a million movies have done that before and nobody believes that the controversial writer of “Kids” and director of “Gummo” is going to make a superficial movie about partying.

Korine casts a pair of former Disney sweethearts and a couple of blonde bombshells to play the four women that will do anything to escape their boring college and make it to Florida for spring break.

Candy (Vanessa Hudgens) and Brit (Ashley Benson) are the two bad girls of the group that can’t pay attention in class despite all of the technological advances integrated into the classroom.

They recruit their oblivious, fun-loving friend Cotty (Rachel Korine), to hold up a fast food joint in order to acquire the funds to go to spring break.

The fourth member of the crew, Faith (Selena Gomez), is a church-going, naive woman whose only connection to the other three is that she has been friends with them since kindergarten and is also obsessed with going on spring break.

The opening montage of the girl’s first impression of spring break illustrates the idiocy of the oversexed drinking games championed by this generation. The scene is perfectly choreographed to a track by Skrillex, who does a great job with the movie’s score.

For the first half of the movie, the group takes the audience to the wild world of spring break. The scenes depict men and women who act as though they have discovered their private parts and alcohol all at the same time, and need to use them as much as possible.

Korine comments that the immature spring breakers have physically grown, but  are still essentially boys and girls, by casting these Disney stars and making references to the teeny boppers of the 90s.

The movie turns away from this social commentary and towards an action thriller when the  poetic rapper and crime lord Alien (James Franco) enters the film. Franco’s stellar performance is a welcomed break from the somewhat lacking performances from these leading ladies.

Franco delivers countless classic monologues, including an impromptu poem titled, “These Three Girls,” that is hysterical and mind numbing at the same time.

But while Franco’s character seems carefree, he is in the middle of a turf war with rival gangster Archie, who is surprisingly played perfectly by Gucci Mane.

The four women are essential parts of Alien and Archie’s battle, and end up finding out more about themselves, which was their initial plan when going on spring break.

Korine’s first major mainstream effort is completely different from anything he’s ever done, but still has an undeniable Korine smell.

However, no one will be able to deny that “Spring Breakers,” like all of Korine’s films to date, is polarizing.