‘Burt Wonderstone’ is anything but magical 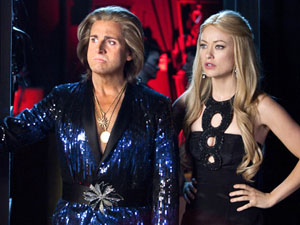 Growing up I wasn’t a fan of magic. I never understood the appeal of a guy waving a wand around, or pulling a rabbit out of a hat. The wonder never took ahold of me. So going into “The Incredible Burt Wonderstone,” I was hoping to get a few laughs and maybe even a glimpse into something I had shied away from as a kid.

Was I asking too much? Yep. What I ended up getting was The Incredible Burt Wonderstone- a movie so lost in its own bewildered sense of magic you can’t help but feel cheated by its sloppy prestige.

Steve Carell plays the title role, a cynical magician who has lost his way. He dumps his best friend and partner, Anton Marvelton, (Steve Buscemi) and is fired by his boss, Doug Munny, (James Gandolfini). Burt must then regain his love of magic, get his friend back, get the girl and… well, you know the rest.

The story (team behind ‘Horrible Bosses’) is a mess, and the direction by Don Scardino (30 Rock) felt uninspired. Some of the gags had potential, mainly Jim Carrey’s as an over-the-top magician stealing Burt’s thunder. However, the comedic effect is lost on the films infuriating habit of pulling its punches.

It’s obvious who the movie takes shots at (Criss Angel, David Blaine, Sigfried and Roy), but it seems as if they didn’t want to hurt anyone’s feelings. As an audience member this was frustrating, especially with characters this blatantly uneven. Carell looks bored, Carrey’s shtick is beaten like a dead horse (an actual scene in the movie; kind of) and Olivia Wilde chooses yet another flat role. Buscemi, Gandolfini and the reliable Alan Arkin give it a shot, but none of them really seem to care. Rightfully so, their talents are wasted on a one-note mess.

That aside, the biggest issue with the film, aside from not being funny, lies with Wonderstone himself. Carell tries, but the character is too unlikeable to empathize with. When Wilde’s character, Jane, tries to right Burt’s path, he just gets worse. Only when Burt meets his idol, Rance Holloway (Arkin) does he start to slightly change, but even then he is played more like a buffoon and less like a comeback kid.  The outrageous ending only makes matters worse by opting for a mean-spirited and phony final act. Considering the talent on and off the screen, it’s probably best for everyone to move on and forget this cheap trick.