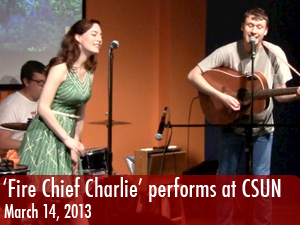 Students were excited to listen to Fire Chief Charlie an upcoming band from Chicago in the Games Room Thursday as part of Music Nights.

Students took a break from the usual billiards and arcade games to listen to the live folk band that uses a mixture of different instruments in their songs.

“The tone of the music is so mellow and puts you in a really nice mood,” said Jessica Tuffield, 20, junior communications major. “I love the setting in here, it’s like a coffee shop setting, it’s really intimate.”

Students enjoyed free pizza and Monster Energy Drinks while listening to the music.

Fire Chief Charlie is a folk band that started in Chicago. The three members are Jonah Malarsky, vocalist of the band, his girlfriend Jamie Devitt, the second vocalist, and drummer Lucas Dunning. The three began singing last summer.

The band sang “Bull Hammer,” “Animals,” “We Are on the Radio”, “Bones” and “Lets Be Happy” among other songs at the event.

The different instruments were kept in a classic looking picnic basket that was kept open during their performance. The basket had ankle bells from India, a tambourine, four different harmonicas and a ukulele.

Malarsky said their small instruments have been collected over time from a store in Chicago called Andy’s Music Shop.

The band created a relaxing ambiance not only through their music but through the different images of nature and classical shows projected on a screen behind them.

Marlasky said the reason for using the visuals is because they like using any type of visuals that go along with the song.

“It’s not just the music but to bring the visual art to the music,” Devitt said.

The band performed at CSUN last year in “The Pitch,” a talent search show created by Five of Five music entertainment, a student run record label at CSUN.

Charlotte Small, Games Room assistant, said she chose to invite the band to perform at CSUN after having experienced their music in “The Pitch”.

“They really enjoy themselves and they are great live. I like them and I knew I immediately wanted to book them,” Small said.

The event occurs twice a semester and the next Music Night will be on April 19 and will feature a local band called “Highbeams.”