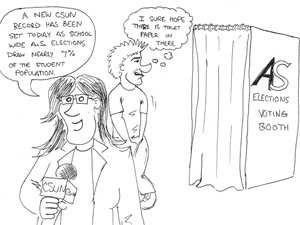 Did you know that we are having elections for our student government? Probably not considering that in the past few years turnout has been around 5 percent. For the 2012 election, there was a 7 percent turnout. Needless to say, Associated Student’s election procedures need to be reformed before it calls itself democratic.

One big reform that is needed is increasing the time to register as a candidate. This year registration for candidates opened on March 1 and closed on the 11, amounting to slightly over a week. This doesn’t give potential candidates much time to form a slate. What is a slate you ask?

A slate is essentially a temporary political party. You can run independently, but if you aren’t part of a slate, don’t expect to win. Slates allow candidates to organize better and try to gain more name recognition for themselves. Allowing more registration time would hopefully allow candidates more time to better organize slates. It wouldn’t hurt if there were an event where potential candidates could meet one another before registering.

Smaller reforms would be changing the election codes. One election rule is that candidates or their helpers cannot escort voters to voting booths. Other policies include limiting the time and places where candidates can campaign. Many of these policies are well meaning, but in essence they limit the ability of candidates to go out and inform students about the elections. They should be struck down in favor of election policies that encourage candidates to engage with students.

There are also strict rules on campaign financing. Again, this is a restriction with good intentions as it encourages candidates not to spend large amounts of money on their campaigns. The downside is these same restrictions discourage candidates from effectively reaching out to large portions of the student body. The various rulings on campaign financing also make it harder for smaller slates or independent candidates to organize themselves effectively since it isn’t clear what they can do to advertise themselves without breaking these policies.

The current A.S. President, Sydni Powell, won her seat with 1,496 votes. There are about 37,000 students at CSUN. In other words, four percent of the student body wanted Powell as A.S. President. This means 96 percent either didn’t or didn’t care enough. The rest of the A.S. Senate didn’t do much better.

If the threshold for a valid election were raised to a minimum 51 percent turnout, one of two things would happen. A.S. would cease to exist if it were unable to meet the threshold or A.S. candidates would actually engage students enough to reach that threshold. They would have to go and talk to students about what A.S. does and why they should vote. If they manage to get at least 51 percent voting turnout then one can say that A.S. is truly democratic, if only just barely.

Why should the election procedure be changed at all you ask? Student government doesn’t matter much anyway, right? While certainly A.S. doesn’t actually do much good, and the case could be made to simply abolish it, but this is an organization that controls a multi-million dollar budget generally in the range of $6 to $8 million dollars in any given year. A budget that big shouldn’t just be given to anyone.

Another thing that needs reform in A.S election is how many senators each college is allowed to have. Currently, each college has two senators. This has the air of a fair compromise since it affords each college equal representation. The problem is that not all colleges within CSUN have the same student population.

The College of Social & Behavioral Sciences and the Business Administration & Economics College has more than 5,000 students each. The Science and Mathematics College and the Humanities College, on the other hand have relatively less than 3,000 students.This means that smaller colleges are overrepresented in A.S. As an analogy, consider how Rhode Island and California both have the same number of Senators at the federal level despite California being several times bigger in popular vote. This is unfair for larger colleges and ideally the A.S. Senate composition should be reformed to acknowledge the difference size of the colleges.

The A.S. needs to look at both its election policies and internal organization if it ever wishes to truly claim itself representative of CSUN’s student population. It’s current incarnation doesn’t work for the students and if it’s failing at it’s most core and fundamental initiative, then the disconnect is bigger than we realize.

Michealangelo Landgrave is the former president of the CSUN Libertarian Club.