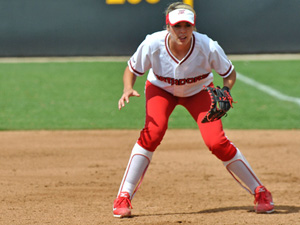 In a second day of doubleheaders against Seattle University and Loyola Marymount, seniors Mia Pagano and Shelly Tait pitched complete games to pick up a pair of victories Sunday for CSUN’s (14-18) softball team 3-1 and 6-3.

“With conference coming up next weekend it is nice to get some momentum. It is our first three wins in a row and the girls are feeling good and we are playing well,” said head coach Tairia Flowers.

In game one against Seattle University (11-17), Northridge came out firing in the first two innings, scoring five runs. Senior second baseman Korinne Randazzo scored three runs for the Matadors, going 2 for 3 with a double and a stolen base. Starting senior catcher Mikayla Thielges also went 2 for 3 with an RBI.

Pagano picked up the first win for the Matadors over Seattle, their second of the weekend over the visiting Redhawks after Saturday’s 10-2 victory.

“We kinda just went right at the team,” said Pagano, who allowed five hits and two earned runs while striking out four in seven innings. “We played them the day before and we knew they were coming back for revenge, because we played really well the day before. So I just wanted to come right at them and jump down.”

Carrying a shutout into the seventh inning, the Matadors defeated Loyola Marymount with a 3-1 victory in game two.

Despite LMU’s eight hits of the game against Tait, the Lions were only able to muster one run.

Northridge put a run across the plate on a groundout RBI by senior third baseman Tiffini Lucero with the bases loaded in the second. A base hit to right field by Pagano would score junior first baseman Tanna Bindi with sophomore center fielder Abby Linn on her heels, but a close call at the plate tagged Linn out to end the inning.

“It always helps (scoring first) because it allows pitchers to find the zone, get into a rhythm and make them chase our pitches and let the defense go to work,” said Tait, who allowed eight hits and one run with one strikeout through seven innings.

The Lions started the first and second innings with lead off doubles, but were unable to advance the runners any farther than second until the seventh inning.

Putting runners on first and second with no outs in the seventh inning, the Lions hit into two straight fielder’s choices and put runners at the corners with two outs. A single into left field by senior second baseman Skylar Segura scored the Lions’ only run, and a third fielder’s choice of the inning ended the game.

Pagano led the Matadors with a 2 for 2 and two RBI performance against Loyola Marymount and Lucero drove in the Matadors other run going 1 for 2 and saved a couple runs with two strong catches at third with runners on.

“I think we played good defense. I mean it is the first time in a couple games that we played solid defense and we came out being aggressive,” Flowers said.