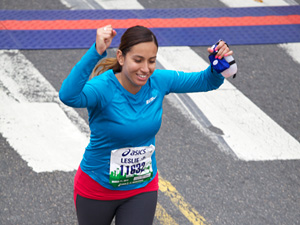 After seven years of training volunteers to run the LA Marathon, kinesiology professor Steven Loy said it would be his last time leading the group, but for many group members it was their first.

Around 23,000 people participated in the 28th annual LA Marathon on Sunday, including  about 60 who trained with Loy.

“It’s so special to be able to help [these participants] accomplish that goal [of completing the marathon], something that most of them would never think of trying,” Loy said.

It was the first marathon for many students, including Carol Martinez, 22, a kinesiology major.

“I was nervous, excited, anxious—everything [before the run]. It was just a bunch of emotions,” she said.

Martinez’s goal was to complete the 26.2-mile course, and she did in about six hours.

Participants were given eight hours to complete the course, but first-time marathon runner and kinesiology major Mike Wong finished in less than four hours.

“I wasn’t really worried about the time anymore when I got to mile 20. I just knew I wanted to complete it,” he said.

The course is dubbed “Stadium to the Sea” because it starts at Dodger Stadium and ends on Ocean Avenue in Santa Monica. Runners pass through several LA landmarks including Hollywood and Highland at mile 12 and Rodeo Drive at mile 17.

As they passed through, event staff cheered on participants from the sidelines and handed water to runners.

Spectators joined in too, making snacks like peanut butter filled pretzels available, and even offered Vaseline to help prevent chafing and blisters.

Participants pumped their fists and shouted jubilantly as they crossed the finish line.  Some devised more elaborate celebrations, including a cartwheel, a headstand and even a marriage proposal.

Celebrating was a culmination of miles and miles of training.

Loy’s group started preparing for the marathon in October of last year, and trained until days before the race.

They met in Santa Clarita on Saturday mornings where their training runs increased incrementally by two miles every week. Outside of Saturday sessions, group members were responsible for running miles set by Loy.

Routines eased up in the final two weeks, and members of the group were advised to carb-load (eat lots of carbohydrates) in the days leading up to the marathon.

Kelly Palmberg, systems analyst for admissions and records at CSUN, said she ran short distances a few times in the week before the marathon.

“Other than that it was just eating a lot of carbs and resting as much as possible,” she said.

Ben Elisondo, CSUN alumnus and former Physical Plant Management employee, ran his fifth marathon on Sunday with his 11-year-old daughter, Lindsay. The two encountered their share of struggles along the course.

“In mile 10 we both started cramping up and [Lindsay] started developing blisters,” Elisondo said. “She really had to muscle through it.”

By miles 16 and 17, Elisondo was considering calling a shuttle for his daughter, but Lindsay was determined to make it to the finish line.

“I wouldn’t have liked the feeling of sitting in a shuttle and driving past everyone while they were running. I just wouldn’t have been able to take that. I really, really wanted to finish this,” she said.

In a little more than seven hours, Elisondo and Lindsay cried tears of joy when they hit the endpoint.

Emily Seeboonruang, 24, a kinesiology major, said she finished the distance in about seven hours.

At about mile 20, her thigh began hurting, so she had to pace herself by running slower and walking. Despite the difficulty, she continued.

“I kept my eye on the prize, and I was taking in the experience, the energy from the people cheering us on and me seeing the city,” she said.

CSUN alumnus Raul Engle is set to train the group next year.

Engle achieved a personal record by finishing the course in three hours and thirty-three minutes.

Running a marathon may seem daunting, but Loy said if an individual has the right mentality, they should attempt the challenge.

“People should push themselves to do something unusual, just challenge themselves, stretch themselves and they’ll be rewarded if they do that,” Loy said.

Those who completed the marathon said the feeling of accomplishment is unlike anything else.

“If you’re thinking about [running a marathon], do it because it just feels amazing to cross the finish line. It doesn’t matter what your time is. You shouldn’t be running for a time. You should be running to finish it,” Lindsay said.