Psychology professor talks about her 42 years at CSUN 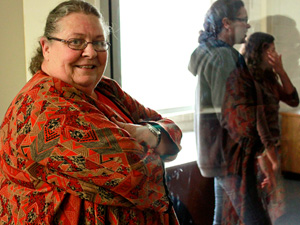 Everyone has favorite memories. Maybe it’s that Christmas when Santa brought the perfect gift, a graduation after years of hard academic work, or an unforgettable birthday party. But what if those favorite memories weren’t real and the mind made them all up?

It’s that process of memory fabrication, called dissociation, that first interested Dee Shepherd-Look, a psychology professor who has taught at CSUN for 42 years.

“It’s fascinating how people can rewrite history and then believe it,” she said. “Imagine going to a wedding that 50 people remember occurring one way, but one other person has a completely different recollection of events.”

This fascination with dissociation began Shepherd-Look’s journey into psychology, leading her to obtaining her doctorate in the field from UCLA in 1972.

Upon graduation, Shepherd-Look had no doubts about seeking a job in education.

“I always wanted to teach,” she said. “I always thought about changing the future, and I thought the best way to do that would be one student at a time.”

Shepherd-Look’s career at CSUN began with a little bit of desperation.

“I chased Patty Keith-Spiegel down like a puppy dog,” she said. “She was an esteemed faculty member (at CSUN), and I told her I wanted to work at CSUN and I got the interview.”

This moment began Shepherd-Look’s career in the CSUN psychology department. Since then, she has spent the bulk of her career measuring her success based on her ability to prepare students to become professional psychologists.

Her primary goal is to create scholars.

“There’s a tragic trend in education toward standardization, which leads to conformity,” she said. “(Instead), I try to develop an incredible curiosity about human behavior in my students. They need to be creative problem solvers.”

Shepherd-Look also helped students prepare for professional careers by establishing an advisement center for students in the psychology department.

“At the time, the college was still really new, and students were sort of wandering the halls looking for advisement,” she said.

Shepherd-Look was able to pair her drive to help students succeed professionally with her own academic interests.

The CSUN professor incorporates this interest with her work at the university by running the Parent-Child Interaction Program in Monterey Hall. This program offers courses for parents with children that have cognitive, social, behavioral, or emotional problems. These courses are designed for parents to learn how to help their children become successful despite these problems.

One of Shepherd-Look’s favorite parts of the Parent-Child Interaction Program is that it is staffed by students in the clinical psychology master’s program, and she gets to supervise them as they learn skills they will use as practicing psychologists.

“I help them develop a professional identity,” she said.

Shepherd-Look also continues her family relationship work outside of the CSUN community.

“Right now I’m seeing a father who had several affairs and his 14-year-old daughter has incredible disgust for her father,” Shepherd-Look said. “I’ve seen them move from a very negative place to a civil one. It’s not positive yet, but it’s civil.”

This progression toward a positive relationship is what really interests Shepherd-Look in working with families.

“There’s a mutual understanding (in these relationships) that begins to occur,” she said. “All the negative interactions like hostility and sarcasm begin to turn into cooperative behavior. There’s an increase in fondness and affection that’s a change from criticism and argument.”

Despite having worked for 42 years, Shepherd-Look said she still doesn’t feel any burnout. This is due in large part because she has continually felt encouragement from colleagues and students at CSUN.

“I can’t think of a single instance where I had an idea and I didn’t get the support I needed,” Shepherd-Look said. “That’s support in terms of money, time and verbal support.”