CSUN proves to be most diverse of CSU system 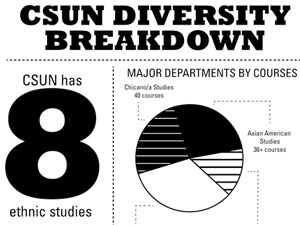 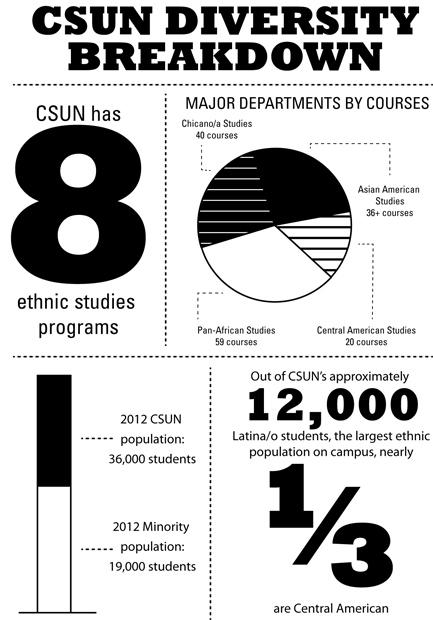 The CSUN community is known to pride itself on its diversity which was reflected on by campus president, Dr. Dianne Harrison, in a letter to the campus community shortly after her arrival in 2012.

In the letter, Harrison noted the “depth of (CSUN’s) diversity” and the history of activism during the civil rights movement, which was the catalyst in the founding of the Chicana/o studies and Pan African studies programs.

Despite years of federal and state budget deficits and subsequent budget reductions in education, CSUN’s well-established ethnic studies programs were affected. However, they continued to provide students with a healthy number of courses in their curriculums.

According to data provided by CSUN’s Office of Institutional Research, the CSUN “minority” population now constitutes more than half the school’s student population. Minority students constitute approximately 19,000 of the school’s 36,000 students, an increase of more than 51% since 1993.

“The efforts to construct these spaces of solidarity and companionship among the ethnic studies programs is important for students because they are very diverse and reflect the CSUN population,” said Dr. Beatriz Cortez, professor of Central American studies, director of the Central American Research And Policy Institute, and co-author of the book Introduction to Central American Studies.

“The program is growing tremendously and we will need even more material and human resources,” Carranza said. “The demand is there from the larger student population, because Los Angeles has a growing Central American population who will be demanding services, so students in professions like health care, journalism, and education will need knowledge of the Central American culture to perform their jobs.”

CSUN’s students and faculty have stood in solidarity with other schools whose ethnic studies programs were at risk.

In 2011, students and faculty protested alongside those at Cal State L.A., against the suspension of their Asian American studies program due to what the administration said was low enrollment.

In 2012, CSUN students traveled to Tucson to protest the ban against Mexican American studies, which was recently upheld in a federal court and which supporters claim promotes ethnic solidarity while fostering racial resentment.

“The idea of social justice is important in the learning of ethnic studies,” said Dr. Gina Masequesmay, chair of the Asian American studies department. “It helps students connect with other minority groups and helps them understand their own identity and how it plays out in the larger racial narrative.”