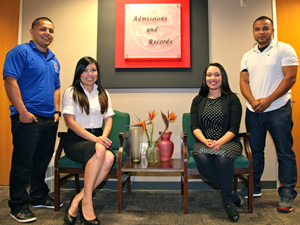 On the tenth anniversary of the Iraq War’s beginning, veterans continue to be afforded college education and benefits through the Post-9/11 G.I. Bill.

Eloisa Smith, veterans services coordinator, said 306 students, undergraduate and graduate veterans, servicemembers and military dependents, attend CSUN this semester through tuition paid from the bills. She added there are 585 declared veterans and servicemembers on campus.

Smith said this bill is important for veterans because it helps them fulfill their goal in completing their degree(s).

“It is a tool to make their lives better after service in the military without being in debt,” she said.

Smith also said the monthly housing allowance received under the bill is based on school’s zip code and that there is not a specific amount. This is because it depends on the percentage that a veteran is covered and if they have a dependent(s). The book stipend is $1,000 one academic year if the veterans are 100 percent covered.

Kort Huettinger, 33, junior kinesiology major and veteran who served in the Coast Guard, said he has been a CSUN student for a year and receives funds for tuition from financial aid and the bill.

“Financial aid pays for most of my tuition, and the Post-9/11 G.I. Bill picks up the rest,” he said.

Huettinger also said he receives tuition funds, a book stipend and housing allowance under the bill.

The original G.I. Bill, G.I. Bill of Rights, was signed into law by President Franklin D. Roosevelt June 22, 1944 and its key provisions were education and training, loan guaranty for homes, farms or businesses and unemployment pay according to the G.I. Bill website.

The G.I. Bill website added that by the time the original G.I. Bill ended on July 25, 1956, 7.8 million of 16 million World War II veterans had participated in an education or training program.

In 1984, the bill was revamped to assure that the legacy of the original bill lived on for the newest generation and became known as the Montgomery G.I. Bill.

In 2008, the bill was updated again and became known as the Post 9/11 G.I. Bill and enhanced the educational benefits by including: full tuition and fees directly to the school for all public school in-state students, monthly housing allowance, annual books and supplies stipend of up to $1,000 and one-time rural benefit payment of $500, according to the website.

According to the website, veterans who have served at least 90 days of active duty service after Sept. 10, 2001, and received an honorable discharge will qualify for the Post-9/11 G.I. Bill.

To qualify for the full benefit a veteran must have served at least three years of active duty after September 10, 2001.

The Post-9/11 G. I. Bill also allows service members the opportunity to transfer their unused benefits to their spouses and children.

David Guzman, 27, a junior business marketing major and veteran who served in the Marine Corps, is in his second semester as a CSUN student, and 80 percent of his tuition is paid by the Post-9/11 G.I. Bill.

Guzman said the bill is a blessing.

Smith said the university is not legally required to accept all veterans, but the veterans are a high priority on campus.

“It is not written in the law that the university is required to admit all veterans,” she said. “However, CSUN takes an active approach to serving our veteran applicants and they are high priority to ensure their admission is carefully reviewed and the applicants/students are served.”

Smith also said the bill is federally funded, so all California colleges should have the same criteria. However, specific benefit payments can vary by the exact tuition and other costs charged at the individual college the veteran attends.

The Yellow Ribbon Program under the bill makes additional funds available for individual’s education that may attend a private school or public out-of-state school.

According to CSUN’s financial aid website, if veteran’s educational benefits cover their whole tuition fee they may not be eligible for their State University Grant or Cal Grant A and B.

Huettinger recommends all veterans to take advantage of this bill.

“We all paid into it,” he said. “We can get an education without going into debt and get a degree after our career in the military.”

For further information regarding the bill students should contact CSUN Veteran Affairs at 818-677-5928 or veteransmail@csun.edu. Supplementary assistance is also available through the Veteran Resource Center in the University Student Union.