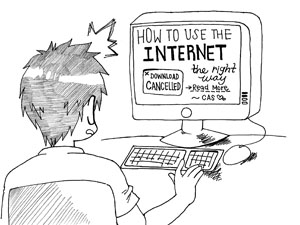 A program titled The Copyright Alert System, or CAS, has been active since the beginning of early March. Five of the major Internet service providers and two of the major content providers collectively known as the Center for Copyright Information (CCI) have signed on to this voluntary “Six Strikes” policy and the result is monopolistic, and federally unregulated control over your Internet access. It’s a disastrous response to an overblown “epidemic” of Internet piracy.

Internet access is no longer a luxury service and instead inhabits the space of essential services that are key to maintaining a standard of living in the developed world. Water, electricity, telephones all comprise these standards. The thugs of five, including, Verizon, Cablevision, Time Warner, Comcast, and AT&T, and the whiners of two, the RIAA and MPAA (big content providers), hold far too much power and influence and their arbitrary glomming onto these entirely Orwellian rules and regulations means it’s time to fight back.

The program follows a basic set of rules. If the Internet service provider or ISP you currently do business with, finds you using P2P services like uTorrent and your activities include supposed transfer of copyrighted files, even if the files may have copyrights but are free to be shared, they can issue you warnings about your activities as well as requiring you to view “educational” material about content piracy. This may seem mundane at first glance but after six supposed strikes or warnings, the ISP’s have free reign to meddle with your Internet, including throttling your download speeds, temporary bans on access to websites deemed harmful to content creators or even outright universal bannings from the internet.

The harshest restrictions occurring after a five or six notices from your ISP vary from company to company and from most reports online, it is unclear whether the ISP’s will actually engage any of these more rigorous restrictions. However, as consumers we should not sit back and wait for the inevitable. This new program is most certainly testing the waters for actual federal legislation currently known as the Stop Online Piracy Act, or SOPA. The SOPA bill has far reaching implications including internet censorship, dismantling fair use laws and other unforeseen consequences that will affect the open use mentality of the free internet.

The rules included in the CAS program have virtually no regulations and the lack of any sort of third party oversight or arbitration puts the consumer at a decided disadvantage. Add a $35 fee to actually go to arbitration and the entire process seems ripe for abuse and misinformation.

Even more worrisome is that the Electronic Frontier Foundation (EFF) has discovered vast amounts of misinformation in the anti-piracy educational material customers are required to learn about so they can start using their paid service again.The absurdity of paying to gain access to an already paid for service can’t be understated or ignored.

Copyright laws are effectively broken in the U.S. Their original intent was to maintain coverage for physical media. The Digital Millenium Copyright Act, passed in 1998, was an attempt to remedy some of the issues with digital copyright’s but the aforementioned MPAA and RIAA, overseers of big content providers like Viacom and Warner Brothers among the many, seem intent on protecting their content at all costs. Even to the detriment of their own failing business models. Instead of leading in innovation and distribution, they’ve idly sat back and decided to sue their way into the hearts and minds of consumers.

They conveniently opt out of consumer friendly services like Netflix and the iTunes store and lose their artists money while at the same time saying it’s all of the pirates fault for dwindling sales. Their attempts at legislating and lobbying for changes to the laws shows they are creatively bankrupt.

Copyright laws and the DMCA were intended to be rules that foster new content and artistic endeavors. They freed publishers and content distributors from having to worry about using publicly available fair use content. It also kept the hungry, sue-happy sharks of the MPAA and RIAA from destroying creative innovation.

These new rules definitely lack bite but they are the gateway to even more offending legislation and regulations. Big media conglomerates would rather give the consumer the middle finger than actually work to improve their content and distribution. The result is a big cushy pillow of people they want to kick their feet up on and politicians seem all too eager to do the heavy lifting of their fat legs, but fortunately we can stop them before it’s too late by pushing back against these draconian rules being implemented by lazy ISP’s and content providers.