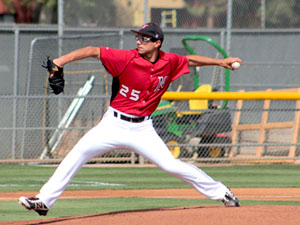 Rallying in the bottom of the eighth inning, the Matadors were too little too late against visiting CSU Bakersfield and their five run outburst in the sixth and seventh innings, losing 5-3 Tuesday night.

The game started as a pitchers duel, with two lefties each dealing on the mound shutting down the opposition. CSUN junior pitcher John Salas came out and silenced the Roadrunners’ bats through the first five innings, giving up two hits and zero runs while recording five strikeouts.

“John gave us a very great outing,” said head coach Matt Curtis. “He was delivering quality pitches and really working the batters. There was nothing else he could have done and we should have won that game for him.”

Coming out in the top of the sixth, the Roadrunners were able to figure Salas out and put runs on the board, breaking the shutout.

With one out, Bakersfield first baseman Dylan Christensen laid a drag bunt down the third base line for a hustling single. After another hit and a walk, the bases were loaded when a sacrifice fly to left field enabled Christensen to tag up and score the game’s first run.

After Bakersfield scored two more runs in the inning, redshirt sophomore pitcher Louis Cohen came in to relieve Salas. Cohen walked his first batter to load up the bases once again, but worked out of the jam, getting pinch hitting sophomore Garrett Pierce to pop up to right field ending the inning.

Roadrunners centerfielder Jordie Hein led off the seventh inning against Cohen with a triple, scoring on an RBI single. Cohen was replaced by freshman pitcher Oscar Sandoval, who gave up an infield single and a run scoring double play, ending his night early.

Curtis called on junior pitcher Harley Holt to finish the inning, striking out his only batter to get the Matadors out of the inning down by five.

“I felt pretty comfortable out there because I only needed to get one out and there was nobody on base,” Holt said. “I kept my fastball down and my off-speed pitches were working great. Coach was calling a good pitching sequence as well to keep the Bakersfield batters guessing.”

Being held to two hits throughout the game, the Matadors bats came alive in the bottom of the eighth inning. A leadoff double by sophomore catcher Alex Mercado was followed by an RBI double by freshman third baseman William Colantono, scoring Northridge’s first run. Scoring two more runs in the inning on singles by junior left fielder Miles Williams and redshirt sophomore right fielder Chester Pak, the Matadors entered the ninth trailing 5-3.

CSUN had a runner reach base on a walk in the ninth inning but couldn’t score again.

“We seem to be getting one quality inning a game at the plate,” Curtis said. “We need to get more of those quality innings throughout the game or else we are not going to score enough runs like today. We have the ability to do it, but we will have to work on that.”