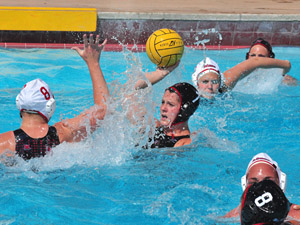 Within the first 20 seconds, Northridge Women’s water polo scored and ran away with the lead to defeat Concordia University 14-10 at home in their second game of the day.

Matadors kept Concordia at arms length the entire game not allowing the Eagles within more than one.

The Eagles came back firing with four goals in the second, but it was no match for the Matadors who fired five goals into the net.

A penalty called on Northridge in the second at 5:27 allowed the Eagles one. Concordia’s Jamie Clark scored two goals back to back in her three-goal period, but the Matadors responded quickly with a goal by Celena Photopulos.

Both teams scored four in the forth, but the Matadors sealed the game in a 14-10 upset.

Nelson and Ferreira lead the Matadors with three goals apiece for the game. Molly Henehan and Jenny Jamison both picked up two for the game to extend the Matador’s winning streak to four.