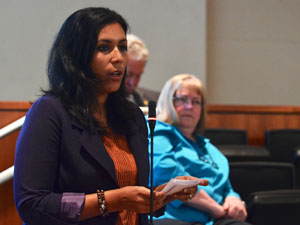 LONG BEACH — The CSU Academic Senate’s resolution to ban tobacco products on all CSU campuses is one step closer to being implemented as an executive order.

“He wants to plan the process to ban all tobacco products in the CSU and (implement) cessation programs,” Guerin said. “We would be pleased to participate in this (and) provided solutions electronically to the board.”

Currently the only CSU campus with a tobacco policy is San Francisco State University, which bans tobacco use outside of designated smoking areas. Cal State Fullerton is the first CSU campus that will become 100 percent smoke-free as of August 2013.

Two CSUN student representatives of the Campuses Organized and United for Good Health (COUGH) expressed their support for such a policy during a 30-minute public forum segment.

“Current smokers can successfully quit with a 100 percent campus tobacco free policy,” said CSUN COUGH president Charleen Mikail. “We must ensure that each of the campuses can provide cessation services to students, faculty and staff.”

“This policy is a long victory and shows COUGH’s efforts around the state haven’t been in vain and we encourage you to move this policy forward,” DePhilippis said. “We have confidence that with your continued support we will be successful in assisting our campus transition in becoming 100 percent tobacco free.”

CSU Chancellor Timothy White did not mention the smoke-free policy in his report, but expressed his overall support for the CSU system as he completes a tour of the 23 CSU campuses.

“You can compare the California University to a quilt of many fabrics, stronger as a whole than the summation of the parts,” White said. “I am learning about the unique fabrics during the visits and find better ways to work together and stronger as one.”

Student representatives from CSU Long Beach Associated Students Inc. (ASI) also spoke during the public forum to oppose Gov. Jerry Brown’s unit cap funding policy in his education budget for 2013-14. His policy would cap financial aid for all CSU students at a maximum of 150 course units by 2015.

ASI Sen. Agatha Gucyski representing the CSULB College of Business Administration explained that the unit cap will hurt students majoring in STEM majors–science, technology, engineering and mathematics–who are required to complete a base of 150 units for an undergraduate degree.

“As the mission of the CSU is to provide high quality and accessible education we don’t want to punish our students,” Gucyski said. “Students who will be affected the most are STEM majors and others as well. Accounting majors need 150 units in order to get a CPA, do we want to punish students getting that degree in order to have a promising future?”

CSULB ASI’s president John Haberstroh handed the resolution, sealed in an envelope, to a board member.

The board also gave recognition to Rebecca Mieliwocki, who was awarded as the 2012 National Teacher of the Year by the Council of Chief State School Officers.

Mieliwocki, who graduated from Cal Poly San Luis Obispo with her bachelors degree and completed her credentials at CSUN, teaches seventh grade English at Luther Burbank Middle School, but has of late been traveling the country and internationally on an education tour. She described how important the CSU was for her training and practice as a teacher.

“I am a proud product of California schools from preschool to my last class at Cal State Northridge,” said Mieliwocki. “I was taught by the best and given so much responsibility and opportunity and expectations through the roof. One of the things I took from Cal Poly (is) I make my kids do everything, they have all the responsibility, they’re in the driving seat. And that’s the ticket (to the future).”