Looking back at season two of ‘Girls’ 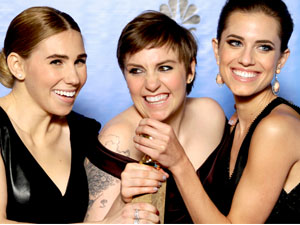 Season two of the critically acclaimed HBO series “Girls” saw the series go in a direction that fans feared after the stellar first season.

While working on season two, creator Lena Dunham was receiving a ton of awards and being touted as the voice of a generation by many in the media. Unfortunately, the success appears to have went to her head as season two became entirely too self-involved.

The great dialogue and interactions of season one were replaced by monologues by Dunham’s character Hannah. Some of the monologues are great, like the one at the end of “Bad Friend” where Hannah points out how the formerly composed Marnie (Allison Williams) is falling apart. But too many monologues, like the “I want to feel everything!” speech in “One Man’s Trash,” are plagued by episodes that are too self-serving.

Dunham uses Hannah to show how stressful “making it” is, but the storyline lacks relativeness and falls flat.

The entire season isn’t a total loss. Ironically, the stars of Girls season two are actually the men. Hannah’s gay ex-boyfriend Elijah (Andrew Rannells) steals the first couple episodes and his interactions with Hannah are some of the shows most intriguing scenes. In “Bad Friend,” the two go on a bender and have an iconic dance scene to Icono Pop’s “I Love It.” The scene propelled the song to the Billboard Hot 100 list, proving that Dunham still has some pop culture relevancy.

Adam has a great speech about how Hannah is a carnival prize that you don’t even want, but try so hard to get anyways. Then, he says, after you win it, you’re stuck walking around the carnival with a big, stupid stuffed animal.

As the season went on and Adam became a more prominent character, the episodes got better. The season ended with its strongest two episodes, one of which had a controversial scene that got a lot of press.

The scene in “On All Four,” shows Adam’s dark side when he forces his girlfriend Natalia to do sexual things she’s not too into. The scene got a lot of negative press about how it was over-the-top and made people feel uncomfortable, but those same critics were calling it rough sex and not rape, which is what it was.

“Girls” may have regressed in its second season, but Dunham’s commentary about femininity and rape awareness on TV is important. The fact that the show ended on a high note inspires hope for season three.