With elections happening Tuesday and Wednesday, Election Chair Breanna Kyle reminded the senators to get the word out to their constituents and attend the Election Kick Off event on the Bayramian Hall Lawn on Monday.

“We’ll be having free food, a DJ and handing out voting information. It’s a great time for everyone to come learn about the candidates,” Kyle said during open forum.

The event will also feature a debate between the two opponents. The “Vision in Unity” slate, headed by current Vice President Christopher Woolett and Senator Talar Alexanian and the “N-Gage” ticket with Senator Bijan Nasseripourtowsi and Sahar Maknouni, president of the Iranian Student Association.

“The kick off is like a voter’s fair,” Alexanian said. “And it’s the day before so the information really sticks in everyone’s minds.”

A voting guide with information on all of the candidates is available online on the A.S. website.

The Senate also approved two new resolutions: the establishment of an A.S. Awareness Month and bicycle and skateboard safety.

This year A.S. Awareness Month will be in April, but in the future will be every February. The goal of the monthlong event is to “increase face-to-face interactions” with the student body and get them more involved and aware of the services offered by A.S.

Senators will be required to hold outdoor office hours, participate in a tabling event each week and organize an A.S. fair at the end of the month.

The Senate then passed a resolution to help promote bike and skateboard safety on campus. The resolution will establish “dismount and walk zones” in areas where foot traffic is heavy and accidents are more likely to happen. One of the proposed dismount zones will be between Cleary and Matador Walk, on the west side of the Oviatt Library.

The resolution cites specific incidents where both riders and pedestrians were injured across campus. It reports that from 2011 to 2012, skateboarding injuries increased 108 percent from 47 to 98 accidents, and bicycle injuries 23 percent from 60 to 74. Klotz Center has also reported multiple injuries due to skateboarding accidents, including about 20 sprains in 2012.

The resolution also “discourages” vehicles from driving on walkways in pedestrian heavy areas to avoid forcing students into the bike lanes and harm’s way.

The Senate allocated more than $5,000 for an event hosted by the women’s rugby team. The benches, canopies and bleachers will be permanent on the field, and can be used by the other teams who practice there, such as flag football or men’s rugby.

The team is hosting the Women’s Rugby Southern California playoffs, which is the first of its kind. As first in the league, the team was given the opportunity, but need help paying for supplies. They play on the North Field, which has no team benches or bleachers for an audience.

The team is expecting between 250-500 people to be in attendance and will be hosting teams from Cal State Long Beach and Cal State Fullerton, among others.

“CSUN has been really supportive of rugby,” said Gillian Chance, president of the rugby club. “We’ve been so successful because of our fans.” 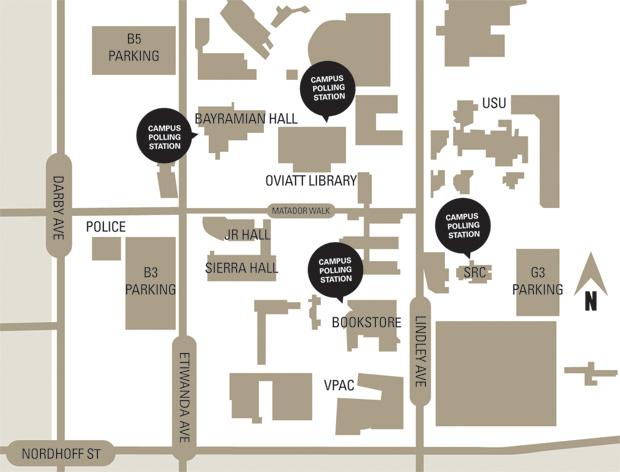