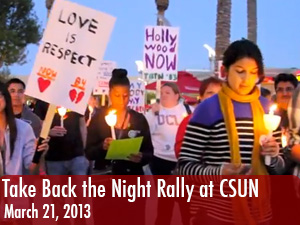 As more than 100 students, faculty and staff marched through campus with candles and picket signs in their hands, chants of “No more silence! No more violence!” could be heard.

Students marched from Plaza del Sol to the Women’s Research and Resource Center as part of the tenth annual Take Back the Night event which aims to raise awareness about violence against women.

According to an annual crime awareness and security report from CSUN’s police department, two reports of rape happened in 2009 and four reports in 2010 on campus. The Project D.A.T.E. organization said in 2012 the university police received 12 reports of rape and three sexual assaults.

Shira Brown, director of the women’s resource center and gender women’s studies professor, said the event is an opportunity for the campus community to publicly confront violence against women and it is important to have this event on any college campus.

“There is a higher rate of violence and sexual assault on college campuses and I think it is really important that we acknowledge that and take a stand,” she said. “We need to inform the members of the community to do what we need to do to make sure people are protected.”

She added that there is an important lesson young men can learn.

“It’s unfortunate that everyone knows the statistic that on a college campus one of three women are going to be sexually assaulted in some way,” Brown said. “We need to figure out whatever the solution is to not teach our girls how not to get raped, but teach our boys how not to rape.”

President Dianne Harrison spoke at the event and there were special performances by Natalia Zukerman, Yazmine Watkins and VDAY Vagina Monologues as well as speeches from organizations on campus.