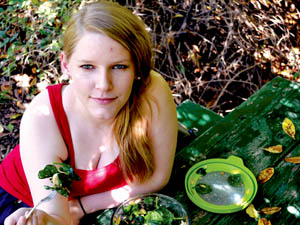 Heather Swann first decided to become a vegetarian after seeing what she called a “horror film” of an animal slaughterhouse. In the beginning of her quest to go meatless she actually had a dream of an emaciated cow with doleful eyes staring back at her asking, “Why?”

Swann, 20, junior and microbiology major, has been going meatless for three years now and can finally be in good company with the rest of Los Angeles. Well, at least on Mondays anyway.

Last February the Los Angeles City Council became a supporter of the international campaign, “Meatless Monday.” According to a webpage on the campaign’s website, the campaign intends to reduce the consumption of meat for health and environmental reasons. It started in 2003 with the help of the Johns Hopkins Bloomberg School of Public Health and has spread to 23 countries.

According to an article written by that same school of public health, there are several environmental health repercussions from industrial agriculture. They include a devastation in animal and plant biodiversity from the use of monocultures, water, air and soil pollution from fertilizers and pesticides, soil erosion and unsustainable water consumption.

Ovadia has been a vegetarian for almost five years. She took an environmental science class back in high school where she learned about the meat and fishing industry’s unsustainable effects on the planet.

There are some health-related consequences of eating too much meat as well. According to a report from the Environmental Working Group, eating large quantities of meat is linked to higher rates of health problems including heart disease, cancer and obesity.

Junior cinema and television arts major Garrett Kynard, 20, became a vegetarian with the help of his mother, a doctor and former vegetarian. He began limiting the amount of meat he ate to improve his future health.

Ellen Bauersfeld, registered dietician at CSUN’s Klotz Student Health Center, thinks that the campaign is a great way to educate the population about the many possible benefits of going meatless.

“There are certain diseases to lower your risk of getting including cardiovascular disease, some cancers, diabetes, obesity and possibly hypertension,” Bauersfeld said. “Plus, an increase possibly in your life span.”

Bauersfeld said that the immediate perception is that people won’t know where to get their protein from, but said that it’s not that difficult if somebody is really educated about food.

“You can be as unhealthy as a vegetarian as a meat eater,” Bauersfeld said. “The key is education and doing it correctly.”

Bauersfeld said there are some nutrients that vegetarians should focus on: protein, iron, calcium and zinc. Making good choices is key to meeting your protein intake as vegetarian, she said.

Beans, nuts and tofus are a source of protein.

Iron can be found in dark leafy greens such as spinach and kale, dried fruits such as apricots and raisins, whole grains and iron fortified breakfast cereals.

Calcium and vitamin D can be found in milk and soy milk.

Zinc can be found in kidney, garbanzo and white beans.

“The most basic referral would be the United States Department of Agriculture’s government website,” Bauersfeld said. “It’s a good starting point to see what makes a healthy meal.”

This is the same website Bauersfeld uses in her one on one sessions with students. It also provides examples and ideas for vegetarians.

Swann said that one thing she really needs to do is pay attention to her body.

“If I’m feeling lightheaded I need more iron or a supplement,” Swann said. “If my nails are getting brittle I have to start upping my calcium intake.”

Vegetarians have to be in tune and comfortable with their bodies, Kynard said. Listening to his body has become even more crucial with his meatless diet.

“Your body goes through a lot of changes getting used to not having meat in it,” Kynard said.

But both Kynard and Swann said that the lifestyle change has given them more energy and made them feel lighter.

Aside from health benefits, a meatless lifestyle can also help save money. An entry from the journal Health Prospect stated that a vegetarian diet is cheaper than a meat inclusive diet. The raw ingredients and vegetarian choices at restaurants often cost less money. Lentils, beans and other nutritious foods can maximize the savings.

“You don’t have to spend a lot of money to be a vegetarian,” Kynard said. “Fruit and vegetables fill you up. The more healthy the food you eat is the more it fills you up.”

Swann said meat is expensive and that her grocery bill has definitely benefitted from this meatless lifestyle, totaling only $20.

When it comes to campus cuisine, however, options at CSUN can become a little pricey.

“They have the tiny little packs of veggies that are horrendously expensive,” Ovadia said. “I’d rather just get the $1 energy bar.”

Kynard said that he’ll get a Subway sandwich on campus sometimes but doesn’t like that he has to pay for avocado.

“Things that should be free for vegetarians, such as avocados, aren’t free,” Kynard said.

However the overall added benefits that come from a meatless lifestyle like reducing the risks of cancer, reducing a carbon footprint and saving a little money can make buying that pesky avocado an easier pill to swallow.