Have a say in how Associated Students spend your money 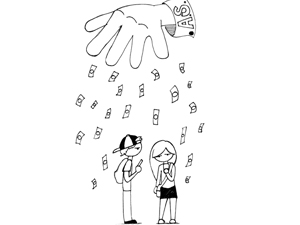 This isn’t high school anymore, kids. This is college. Student government can make more important decisions than what color palette should be used for prom this year. And as the annual elections for Associated Students dawns upon us, it’s important that we the students stand up and take notice of who is representing our interests, what they’re doing and consequently, flex our voting power.

CSUN’s A.S. wields around $7 million worth of power over students and clubs across campus this year alone. That kind of money shouldn’t be thrown around while the student body isn’t paying any attention. It could end up funding something incredibly pointless, like a Matador football team.

The power of A.S. is supplied by students. I’m not speaking metaphorically here, I mean literally. Students paid a fee of $84 a semester and summer students paid $49 so that A.S. can disburse funds as they see fit. We also pay other additional fees that A.S. has control over. For example, students pay $15 for the “Instructionally Related Activity Fee” (IRA) that helps fund academically-related events. There is also the ‘Campus Quality Fee,’ which is $104 per semester for students and supports a range of on-campus things, like Intercollegiate Athletics and student support services.

That is $203 a semester, $406 a year of your money (let’s not get into what happens if the fees go up next year). Aren’t you interested in what they’re doing with it?

The 2012-2013 budget is posted online on their website, along with every agenda and its corresponding list of minutes from every meeting since Spring 2009. Like everything in the world, the information is easily available at our fingertips. And to their credit, the Senate is open about the decisions they make every week and maintain decent transparency. However, they are not very loud about any of it so students never know where to look for information or help.

So what are they doing with everyone’s money? Giving it away of course! A.S. rations out money to different clubs and organizations. From the entire Greek system down to the Daily Sundial itself, just about everyone on campus is getting a little money from the Senate. Most of the funds go toward helping to pay for certain speakers and fund some club travel, or sometimes they will even sponsor events.

But between midterms, chapter readings, 10-page papers and a part-time job, it’s hard to stop and look over what is on the agenda for this week’s meeting. This partly explains why barely 8 percent of the student body participated in last year’s student elections, but by no means does it excuse it.

By taking the time to read about the candidates and their positions, students can start working on being well informed citizens. In our democratic society, knowledge is power, and voting is how we flex it. By practicing being a good citizen here in school, students can take those skills along to the mayoral election later in the spring, the next congressional elections and the presidential election in 2016.

Students have the chance to go even further than voting and actually speak directly to the Senate itself. Every meeting, there is an ‘Open Forum’ section of the agenda where anyone in the public has three minutes to speak about issues concerning CSUN. Usually, clubs who are up for financial recommendations use this time to make their case, but the microphone is open to anyone. Students need to take advantage of this face to face time with the Senate and speak about important issues on campus.

For those of us with stage fright, speaking to the entire Senate can be a near death experience. But you would be surprised how different the meetings go when there is actually people in the audience.

During a meeting a few weeks ago, Dr. Bernadean Broadous brought her Pan-African studies 161 class in and filled the entire Senate gallery. The audience made the senators act more professional: they sat up straighter, spoke clearly and explained everything to the audience. Perhaps more importantly, they smiled.

By attending meetings, students can hold their senators responsible and remind them who they are working for.

Paying attention to politics can seem tedious, but by taking an active role in what’s going on around you, you can actually make a difference. It’s a sign of maturity and like paying rent and establishing credit, it’s something you need to learn the importance of during college.