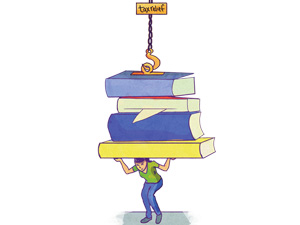 A bill has been introduced to the California State Assembly to help counterbalance the rising cost of college tuition by making the purchase of textbooks exempt from state sales tax.

AB 479, the Textbook Tax Relief Act, was introduced Feb. 19 by Assemblyman Tim Donnelly (R-Twin Peaks), who said a major impetus in introducing this bill was from survey results conducted by the U.S. Public Research Interest Group.

“(That) study said seven out of 10 college students have skipped buying a textbook because they’re too expensive,” Donnelly said. “This is a way for students to be able to afford books they need to be successful.”

According to the National Association of College Stores, the average college student spends $655 a year on textbooks. With the Los Angeles sales tax of 9 percent, CSUN students have the potential to save an average of $59 a year if this bill is passed.

Employees of the Matador Bookstore see this as a plus for CSUN students.

“We are committed to driving student access with affordable textbook options,” Amy Berger, director of the Matador Bookstore, said. “We fully support efforts that contribute to this same mission.”

Berger said she is not sure if this bill would attract more students into the Matador Bookstore.

Donnelly said the biggest argument against the sales tax exemption is that it could cost the state money, but believes that income tax from graduated college students who enter the workforce would offset this potential cost.

“I’d argue that helping students get out of school quicker (by making school costs cheaper) will save the state money by getting student paying income tax quicker,” Donnelly said. “Personal income tax is the biggest way California makes money.”

Donnelly said that the Textbook Tax Relief Act could also benefit the state by encouraging out-of-state students to come to California schools.

Some CSUN students were in support of AB 479.

“In community college I saw the value of education because textbooks were costing more than tuition,” said Jade Flader, 25, junior cinema and television arts major. “With the (Board of Governors) fee waiver, I was only paying $50 a quarter for tuition, but my textbooks were between $150 and $200.”

Flader also said this bill has the potential to help students permanently keep their textbooks to reference throughout their college career.

“With the lower cost, this would give most students a chance to own their books instead of rent them,” she said.

Other students disagreed with one of Donnelly’s perceived perks of the bill.

“I don’t think this would encourage out-of-state students to come to California schools,” said Mercedes Ortiz, 22, senior urban studies major. “They would have to pay out-of-state tuition so how would this save them money?”

At this time, the text of the bill is unclear whether digital textbooks would be exempt from sales tax, but Donnelly said he would want this act to make them exempt as well.

“The whole point of this bill is for it to apply to educational tools that help students succeed,” Donnelly said. “I’m in favor of (the bill) applying to all types of textbooks.”

AB 479 has now been referred to the Assembly Committee on Revenue and Taxation. They will consider the bill on April 1.