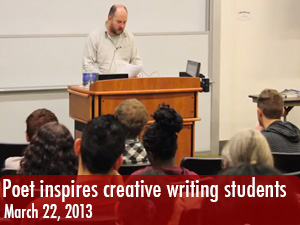 He wrote his first poem when he was 14 and started composition poems that rhymed. His first poem was titled “The Roller Coaster of Life,” and later developed a comic touch to his writing about his life experiences.

“He is a magnificent poet,” said Sean Pessin, 24, graduate English major and president of the NCWC Club.

“He is a poet who focuses on the narrative, and as a fiction writer I can relate. He has surreal sensitivity (and) would take a cliché that you see a hundred million times and twist it until it breaks into something really awesome,” Pessin said.

With more than 100 students in attendance, they laughed together and enjoyed the sarcastic yet personal poetry of McDaniel. At the end of his reading, there was a Q&A session where students shared their thoughts and asked for advice.

“I thought the event was wonderful. It’s great that the club brought a professional to campus. A professional that has succeeded in the area that many (of us) are aspiring to be,” said Corri Ditch, graduate English major. “This is great I am really thankful to the NCWC club.”

“His use of imagery is just stunning, he described a poignant moment like the death of his mother and intertwined (it) with a football or a skull,” said Robin Smith, 23, graduate English major and member of the NCWC.

CSUN was McDaniel’s last stop in California before returning to New York. McDaniel said that the California sunset made up for the traffic that he had to deal with to on his way to campus.

McDaniel stayed to sign books and chat with students interested in talking to him. Some of his publications include “The Endarkenment,” “The Splinter Factory,” and “The Forgiveness Parade.”