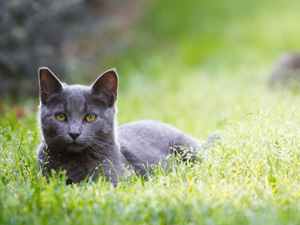 Due to an overwhelming community of feral cats on campus, several students, staff and faculty members have formed a self-funded group, the CSUN Cat People. The group is dedicated to feeding and caring for these homeless animals with the ultimate goal of reducing their population while educating others about feline overpopulation.

“CSUN is among a number of urban campuses with a feral cat population. Others in the area include UCLA, Valley College and Pierce College,” said Sabina Magliocco, executive member of the Cat People and professor of anthropology

According to Louise Adams, a member of the group and an administrative assistant for the Testing Center, staff and faculty have been feeding the cats since 1994. In 2001 they organized officially as CSUN Cat People.

Many of the cats surfaced immediately following the 1994 Northridge earthquake, while others found their way to campus due to the availability of food and shelter. Other cats were dumped on campus by community members who no longer wanted them.

Magliocco said there are roughly 15 to 20 cats currently on campus. This number is down from 75 in 2002.

The group is completely funded through donations and does not receive any funds from the university. Donations are not tracked and are provided in the form of money, as well as cat food. Volunteers are not paid and often spend their own money on spay and neuter surgeries, transportation and medical costs when needed.

According to Adams, CSUN is one of several colleges to have a managed feral cat population on campus. Others include Stanford, Texas A&M and Florida Southern University.

The Cat People practices Trap-Neuter-Release to control the population through birth control and natural attrition. Adams said that when the cats are spayed or neutered, their right ear is tipped by a doctor, which signifies that the cat has been altered.

“The presence of stable colonies discourages other cats from making a home here,” Magliocco said. “Eventually the cats die off and the cat population decreases.”

Special feeding stations have been built and distributed throughout campus, most of which are camouflaged to look like landscaping rocks.

Magliocco said there are four active feeding stations on campus. This is down from the original 20 due to population decline. The group does not disclose the location of feeding stations to protect the cats.

“Feral cats are shy by nature, and we don’t want to attract unwanted attention to the feeding stations,” Magliocco said.

The Cat People works closely with Physical Plant Management (PPM) and the CSUN Police Department in keeping the cats safe and allowing their members to easily access the PPM-designed feeding stations.

“Campus police works closely with us to help create a humane environment for the campus cats,” Magliocco said.

According to Captain Alfredo Fernandez, the CSUN Police Department assists the Cat People. allowing them to park in white loading zones while attending to the feeding stations. By allowing this, members do not have to make repeated trips to transfer food, water and other material from parking lots.

Most of the feeders and trappers are older women who could be carrying 40 pounds of equipment, Magliocco said.

Feeders usually carry heavy bags of dry food and containers with clean water. Sometimes traps are transported and if they carry a large, mature cat it can weight up to 25 pounds. Most feedings are done after hours.

Magliocco said the group has not experienced any instances of vandalism or cruelty against the cats.

Although unintended, the cats also help keep the campus free of rodents and other pests.