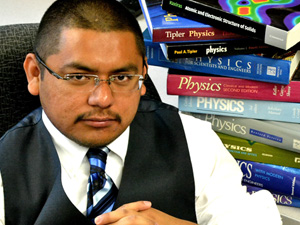 Wind passing through a leaf or a ball bouncing on the ground are daily events that do not stand out to the untrained eye.

But Jesus Morales has a keen eye for minor occurrences in nature.

Morales, a graduate physics student at CSUN, holds three undergraduate degrees in applied physics, mathematics and physics. His studies have transformed his way of observation by leading him to seeing motions more distinctly.

“I can’t see things in a big picture anymore, I can only look at bits of things and how they work,” he said.

Rainy days, for instance, are more than just water falling from the sky for the physics student.

First, he envisions rain clouds and thinks about the electromagnetic forces influencing them. He then observes how wind or temperature affects where the rain lands. Each rain drop collides with an object, such as a leaf or rain coat, creating a new group of smaller droplets.

The fact that the process of a raindrop falling occurs thousands of times during a storm leaves the physicist astonished.

Morales also perceives the world as a series of questions. For example, when light passes through glass, he wonders why light only passes through that substance and no other.

Although physics has given Morales awareness of the world, there is a downside. Being familiar with quantum mechanics makes it nearly impossible for him to sit through films that often neglect the laws of physics.

He finds it challenging to watch “Star Trek” and not be bothered by the fact that the space ships can realistically fly.

Movies involving time travel, such as “Back to The Future,” are difficult for Morales to view. After discovering that the universe is continuously expanding and Earth’s orbit around the sun is not fixed, he notices how time travel films ignore the notion of position.

“If a person was to travel back in time they would probably be in some unknown part of space, where they could be too close to a star, black hole or inside a planet” he said.

Since being introduced to the field, he avoids action cinemas with explosives, time travel, crashes, or sky-falls.

“The real world is much more complex than what Hollywood movies portrays it to be,” he said.

What attracted Morales to physics was the unknown mathematics behind the movement of fluids. The way a fluid’s molecules still remain connected but flow in different directions is a puzzle that inspired him.

There are times when physics can be an obstacle for the student, but because he is able to annotate the smallest occurrences of life, he remains interested.

Every discovery made in physics always presents a string of more questions that need to be solved.

“In physics, you usually don’t see your own work, it’s a carried on advancement,” Morales said.

Morales aspires to teach physics and become a philanthropist for scientific research.

Since the science is continuously developing, the student believes his approach to the world will adapt with each new advancement in physics. The natural movements he already has a glimpse of will only grow more complex as the field evolves.

“It may be possible that, if proven wrong, many of the results we know in physics could be covering up an even stranger truth and lead to a deeper understanding to our universe,” Morales said.