Google Glass: a window into the future 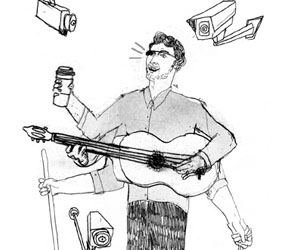 Greetings, Programs, and welcome to the future! Step right this way and we’ll get you fitted for your jet packs! Well, no, not really. Still, we are getting there. We have robot maids, like the utterly adorable Roomba and robot cars, like Google’s self driving vehicles currently in development. The latest tech invention getting a fair share of the media’s attention is Google Glass.

Google Glass is the tech giant’s foray into the world of wearable computing. It’s the eye glass shaped companion to your smartphone (Android and iPhone alike) acting as a translucent display and ready to serve at, lliterally, your beck and call. With a simple “Okay, Glass,” you can send a text message or email, get directions or even search for information, all with your voice. It can also take pictures and record video and that has some people worried.

See, as much as we humans are a social species, we like our privacy and the idea of people walking around with Internet-connected cameras strapped to their faces unnerves some folks. In fact, there are more than a thousand followers of the blog StopTheCyborgs.org which, in opposition to Glass specifically, aims “to stop a future in which privacy is impossible.” With a simple search, you can find tons of articles written about how Glass will make the entire world a reality show and how it’s just an “Orwellian surveillance with fluffier branding,” where people will record everything 24/7. Reading articles like these make Google Glass sound like a fairly scary thing.

But is it? I mean, think about it: we already live in a world where anyone with a smartphone, even one that’s a few years old, can record video in full HD quality. We take pictures of things and, within moments, they’re up on our Facebook profiles. There is no functionality of Google Glass that isn’t already available on our phones, but what critics seem to take issue with is the form factor and what possibilities this opens up.

Anton Wahlman , a writer for The Street, asked readers to “imagine the bar scene when people start wearing Google Glasses? Within a second or two, you will have all available information about the person in front of you. Some of that information may not be so flattering.”

Yes! Yes I can! I can absolutely imagine that and why wouldn’t I want that?

See, the people who write those fearful articles are operating with the misguided premise that privacy exists in public spaces. Your home is a private space, not the entire world. And we know this already. If you’re talking on your phone in a public space, you automatically shy away from talking about private or embarrassing matters because you know that anyone within earshot will hear you. Hell, if someone so much as raises their voice on the bus, there will be at least three cell cams raised and running, just in case.

The other argument people are making is that Google Glass will make social interactions more awkward.This makes almost less sense because what is awkwardness but some amount of ignorance on the part of one or more individuals? Being able to see a digest of the information people already make publicly available about themselves would eliminate so many of the socially awkward situations we get into. For example, if Glass tells me that the beautiful young lady at the bar is already in a relationship, I know to look elsewhere. And how many times have you had to muddle through a conversation with someone you “knew” but couldn’t remember their name to save your life? Or what if you were in an car accident that you knew wasn’t your fault or if someone starts picking a fight with you?

Google Glass is an important piece of technology for many reasons and I do think that it’s important to think about the cultural implications of it. But if your concerns are related to privacy issues or societal behavior, then you do not have my sympathy.

Technology has changed the way we experience life. Cellphones, tablets and iPods are now part of our daily lives. Often, people feel “naked” when they forget their cellphone. Societies growing dependance on technology is a habit that we don’t plan to stop anytime soon. Directions, translations, forecasts, taking pictures and comparing prices can all be done at your fingertips yet will be end up being to much effort once Google’s new product, Glass, is released at the end of this year.

Google Glass will increase societies dependence on technology and that’s where the problem lies. Technology is important but not at the expense of our humanity.

Google Glass is an integrated device that sits on a pair of proprietary eyeglasses. It acts as a heads up display with wi-fi, video recording capabilities and voice commands. A small window will appear at the periphery of your eye-sight and act as a tiny screen. This new gadget is a portal to the future. At the same time, we will also lose sight of the world around us while also looking ridiculous as we talk to ourselves.

The 5 Point Café Bar in Seattle has already preemptively prohibited the use of Glass in their facilities for privacy concerns. Although you go to a bar to socialize there is an expected level of privacy that comes with social interaction.

Google Glass will also allow for more invasive ads from revenue-hungry corporations and transform our world into a constant billboard.

What’s to stop Starbucks from advertising their new ridiculous sugary concoction as you walk by? The intrusion of ads is a serious issue when considering what Google will sell for acces to your eyeballs.

By incorporating all these uses at once it seems like a wonderful tool, and it is but will it be necessary on a daily basis?

Although these glasses have not been released to the public at large, Google have given some people the opportunity to test drive them. Even without the product seeing a full release there is already a campaign that against the product that calls the Google Glass owners cyborgs.

Stop the Cyborgs is an organization which promoting the ban of Google Glass. They offer tips on how to stop the eventual influx of robotically enhanced members of society. The campaign argues that allowing this product to be used makes it socially acceptable to record any life situation in any environment to the detriment of privacy.

The campaign acknowledges that some people may need this product to improve their life if they are using it as an aid for a disability. Google Glass could assist an Alzheimer’s patient in remembering, a visually impaired person with navigating or help autism patients read subtle facial cues.

Technology is often unnecessary but ends up being seductive however we often fail to realize it is a slow death march where our memory becomes dependent on the latest gadget.

No, Google Glass is not necessary to improve our daily lives and even though we all give in to technology because it’s convenient, it may not be what is best for our memory, privacy and social interaction. But it sure is easier when you want to find the closest Starbucks.