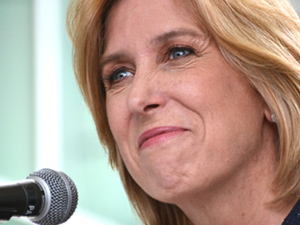 Greuel said she is incredibly proud to announce Clinton’s endorsement of her campaign for mayor after working with him twelve years ago helping to rebuild the San Fernando Valley after the Northridge Earthquake.

“I’m asking all of LA to pay attention to the election coming up on May 21. Bill Clinton thinks it’s important,” Greuel said.

Greuel worked for the U.S. Office for Housing and Development and fast-tracked more than $1 billion of federal aid to help the victims of the earthquake. Greuel said that fires were raging across the San Fernando Valley and things such as basic services were a challenge.

“We weren’t in it for the cameras or the attention,” Greuel said. “We wanted to get people out of their tents and into their homes.”

Greuel said that recruiting students to not just come to universities to study but also to stay and thrive in the community can help create “hot spots” for jobs and businesses.

Former California State Assemblyman Richard Katz said that Greuel, a native of the San Fernando Valley, was crucial with her hands-on help.

“It was critical for people to have the eyes and ears of someone who grew up in the valley,” Katz said. “Bill Clinton’s endorsement not only shows confidence Wendy has to get elected, but shows confidence in her ability to break down barriers.”

Katz said that ability will help Greuel coordinate with federal, state and city officials to be productive.

Joy Picus, former Los Angeles City Council member, said she was proud to see Greuel’s campaign focus on diversity, because it is important to see issues through different people’s points of view.

Picus was the first woman to represent the San Fernando Valley and said that having women in public life is important.

Greuel said that Los Angeles has new challenges to face that City Hall has created.

“I was here for the devastation,” Greuel said, referring to the 1994 Northridge earthquake. “Now, Los Angeles faces a new crisis. With your support and the people behind me we can create a better Los Angeles.”

An Update on Eric Garcetti:

Garcetti will speak at the Universal City North Hollywood Chamber Breakfast at the Studio City Daily Grill Tuesday at 7:30 a.m. He will also host a rally and walk at 620 A-Centre St. in San Pedro on March 30 at 10:30 a.m. Former mayoral candidate Emanuel Pleitez has endorsed Garcetti for mayor.