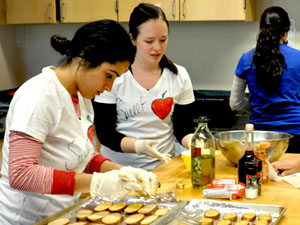 Anyone considering competing in Food Network’s show “Chopped” or “The Next Iron Chef,” should watch their backs. The Sweet Hearts, the victors of Saturday’s 7th Annual Iron Matador cook-off, aren’t messing around.

The Iron Matador competition is an annual competition hosted by the Student Dietetic & Food Science Association (SDFSA) that gives students the chance to put their culinary skills to the test against their peers for the chance to stake their claim as CSUN’s ultimate student chefs.

The theme of this year’s three-course battle royale was disease-specific cooking. Each of the four teams claimed a disease in which they tailored their dishes around in order to cater to the dietary needs of those diagnosed with the chosen ailment.

The Sweet Hearts, which consist of Qundeel Khattak, Jessica Reynolds, Lilyan Vosghanian, are all nutrition majors and tackled heart disease.

Most competitors at this year’s Iron Matador were well-rounded in the world of nutrition and dietetics, some team members were also food-enthusiasts from different departments. The disease-specific cooking didn’t pose much a problem, that is, until the kicker. Each team had to incorporate a secret ingredient into their dishes that wasn’t revealed until moments before the competition began: chocolate.

Each dish was judged in seven categories: creativity of incorporating the secret ingredient, appearance and presentation of the dish, taste and texture, appropriate temperature, food safety while cooking, adherence of recipe to specific disease and reasonable portion size.

Having 45 minutes to prepare each appetizer, entrée and dessert, each team of chefs presented their finished creations to a panel of five judges which included both students and professors, all with relevant knowledge in the food-arena.

Having placed second at last year’s Iron Matador, the Sweet Hearts came in to the competition prepared and with confidence but still experienced the unexpected periodically.

“We did a test run of all our recipes. Especially our frozen yogurt because this was our first time using an ice cream machine and it’s actually different than the one we practiced on,” Khattak said. “And the secret ingredient was challenging for the first two (dishes) because (it was) chocolate.”

“Chocolate with salmon, we were just so nervous about that,” her teammate Reynolds said.

Worries aside, the Sweet Hearts were ecstatic when they were announced the winners and were each presented with custom “Iron Matador” aprons and the news that they would have one of their winning recipes featured at the upcoming SDFSA Career Symposium on April 20.