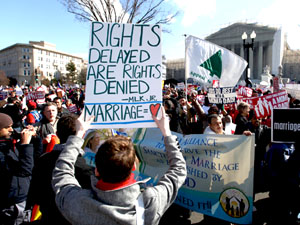 The U.S. Supreme Court was divided on its opinion of the constitutionality and validity of the case for California’s Proposition 8 Tuesday in the potentially landmark case, Hollingsworth v. Perry.

The questions presented before the court regarded two things: the legal standing of the petitioners of Proposition 8 to appeal their case to the federal court and the constitutionality of the proposition itself under the Equal Protection Clause of the 14th Amendment.

The justices were fairly concerned with the first question of the case.

In his opening argument, Proposition 8 attorney Charles Cooper began with an anecdote citing a New York court’s remark about same-sex marriage as an “accepted truth for almost everyone who ever lived in any society in which marriage existed,” when Chief Justice John Roberts interrupted Cooper mid-sentence to move on to the “standing” issue.

Justice Ruth Bader Ginsburg questioned whether the court has ever given standing to proponents of a ballot initiative such as Proposition 8.

“The proponents are interested in getting it on the ballot and seeing that all of the proper procedures are followed,” Ginsburg said. “But once it’s passed, they have no proprietary interest in it. It’s law for them just as it is for everyone else, so how are they distinguishable from the California citizenry in general?”

According to SCOTUS blogger Tom Goldstein, at least five justices “seriously doubt” if the proponents of Proposition 8 have the legal grounds to fight for the initiative on behalf of California because of the history of Hollingsworth v. Perry.

The road to the Supreme Court

Proposition 8 is a ballot initiative California voters approved in November 2008, which amended the California constitution to define marriage as between a man and a woman, overturning a California Supreme Court decision made earlier that year, which ruled that same-sex couples have a right to marry.

Two same-sex couples – Kristin M. Perry and Sandra B. Stier, and Paul T. Katami and Jeffrey J. Zarrillo – sued the California government in May 2009, which declined to defend the proposition, and Dennis Hollingsworth of Protectmarriage.com intervened on behalf of the state.

Judge Vaughn Walker of the U.S. District Court of the Northern District of California ruled that Proposition 8 is unconstitutional under the 14th Amendment of the U.S. Constitution.

If the justices decide there is no standing, they would not need to resolve issue of constitutionality. It would effectively “vacate,” or erase, the decision of the Ninth Circuit court but uphold Judge Walker’s ruling.

According to SCOTUS blog writer Marty Lederman, there are four other outcomes the court may decide.

The first would please Proposition 8 proponents and uphold its constitutionality, while the second would rule that it is unconstitutional for any state to discriminate against same-sex couples under the 14th Amendment.

The fourth possible ruling could invalidate an initiative such as Proposition 8 in California only, arguing that if a state offers the same benefits and privileges to same-sex couples as opposite-sex couples, and has at one point given same-sex couples the right to marriage, there is no justification to invalidate that right.

The judges will not make a decision before hearing the arguments for and against the Defense of Marriage Act today, in United States v. Windsor. DOMA denies many federal benefits to same-sex couples.