Women can have it all; at least in outer space 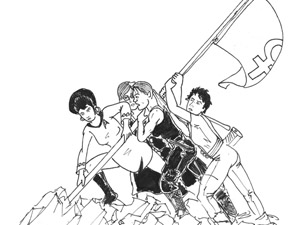 March is women’s history month. A chance for women to look back, see how far we’ve come and aspire to new accomplishments in the future. Too bad the very distant future seems to be the only place women have a shot at equality. At least on my TV.

Prime time is full of seemingly powerful women, but scratch the surface and they fall back into old stereotypes and tired cliches. Feel like watching a murder mystery? The victim will most likely be a young, white woman. How about a comedy? Get ready for a steady stream of young, skinny housewives married to older, overweight men. Seriously, network television? Whatever sells that ad time, I guess.

However, there is one place in the entertainment wasteland where women can save the day. A place where we get to imagine ourselves as more than just a pretty little sidekick to some big, strong man. That magical land is called science fiction.

Shows like Joss Whedon’s “Firefly” or the SyFy Channel’s “Battlestar Galactica” reboot are enjoying a resurgence in online popularity. And have you noticed all those girls wearing bow-ties? Doctor Who has been picking up more female fans every year. While Matt Smith’s dreamy eyes and goofy smile may be a factor, the strong, smart women who travel with our beloved Doctor don’t hurt either.

Empowered women on sci/fi shows go back a long way. Gene Roddenberry broke the rules when he cast African-American actress Nichelle Nichols as Communications Officer Uhura on Star Trek in 1966. The role was originally written for a male actor, but Roddenberry wanted his crew of the future to be diverse.

Fast forward to my coming-of-age movie marathons and I remember two women who shaped my ideas about what a girl could do, at least in the future. Sigourney Weaver’s portrayal of Ellen Ripley in the Alien franchise was downright jaw-dropping. When she blew that slathering, slim, chest-exploding alien out the airlock in the first movie, I was in awe.

After Aliens, there came another summer blockbuster, “Terminator 2: Judgement Day.” Yeah, Sarah Connor wasn’t much more than a screaming damsel in distress in the first movie, but by the time Linda Hamilton turned up in the sequel, it was obvious women’s lib had taken a turn. And I liked it. She rocked the aviator sunglasses and white tank-top while kicking the shit out of murderous robots. What was really special about Connor, though, was that she could kickass and be flawed at the same time. Her emotional trauma turned her into this gun-wielding, mentally unstable, apocalyptic survivalist.

Ripley and Conner lead the way for even more possibilities in the realm of futuristic female fortitude.

Joss Whedon has made a career giving strong, smart women the lead in shows like “Buffy The Vampire Slayer.” When explaining why he continues to write strong women into his scripts during a 2006 speech for Equality Now , he said, “because you’re still asking me that question.”

Whedon’s cast of the space western, “Firefly” included a young woman named Kaylie who could fix anything on the show’s old space freighter; Zoe, the captain’s second-in-command and a self-proclaimed “big damn hero” played by Gina Torres; and little River Tam, a 16-year-old super genius whose simple one-liners included the fan favorite, “And remember, I can kill you with my brain.” What’s not to love?

Another timely reboot came in the fall of 2004 with Battlestar Galactica. The premise for this post-9/11 fable is that humanity has been all but wiped out by a mechanical race called the Cylons. They were created by humans, but they rebelled.The last 40,000 or so human survivors are floating around in their spaceships, pursued by the murderous machines and lead by President Laura Roslin, a role played by Academy Award nominee Mary McDonnell.

Roslin is tough, smart and surprisingly cunning when challenged by political backstabbers and two-faced allies with ulterior motives. Her kind of political prowess is generally the exclusive domain of male characters on the usual network shows.

Another character fans came to love on Battlestar is the deeply flawed, but resilient fighter pilot, Starbuck, played by Katee Sackhoff. Throughout the series she deals with the lingering issues of growing up with an absent father and abusive mother and the death of her young love. Starbuck may be the most complex woman we’ve seen in science fiction and I love that the writers allowed her to go to so many darkly moving places.

Why can’t we see a woman as nuanced as Sackhoff’s Starbuck on a regular old, network TV show or studio film? The powers-that-be like to pretend to give us new female characters, but they always fall into the same tired old stereotypes. Emily Deschanel’s world-class forensic scientist on “Bones” can only exist because she is also alarmingly emotionally stunted. We can’t have a smart lady with feelings, y’know. Detective Olivia Benson on Law and Order SVU appears strong only because she seems to be the only woman in New York City who hasn’t been sexually assaulted. The women of the CSI franchise are allowed an opinion because they’ve met the network’s impossibly high beauty standards. Do any of them eat? Or age?

It’s pathetic that the only place we can find consistently strong, nuanced women in entertainment media is in the realm of fantastical fiction. I’d love to see a President Rosalind, Donna Noble or Buffy in a more realistic setting. Imagine what would happen if Ellen Ripley walked into a courtroom drama or if Rose Tyler was allowed to investigate a crime on Law & Order. Someone would probably get a slap. And, oh how I wish it was a network exec.

-Michelle Reuter regularly travels through time and space with her trusty DVR and has been known to disappear into the TARDIS for entire days at a time.