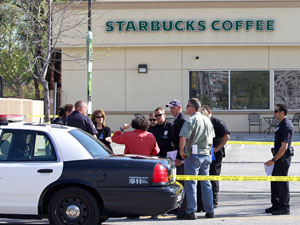 Smith said they are still processing video surveillance at the multiple locations the girl was taken to.

“As you know the San Fernando Valley has a bunch of video surveillance,” Smith said during a live-stream of the conference. “I don’t have the result of that canvas right now but know video cameras are one of our best clues.”
Several reporters asked about the possible repetition of this crime and if it had been connected with other crimes.
“We don’t have a series of children being snatched out of their beds at night,” Smith said. “But until these individuals are caught we don’t know what they’re capable of.”
If anyone has any tips they can call the LAPD Robbery-Homicide Division at 213-486-6890. Anonymity will be offered.

>>>UPDATE March 27 9 p.m.: This article has been updated with additional information and does not use the victim’s name because she is a minor.

A 10-year old girl was found in a Starbucks parking lot Wednesday after she had been missing from her home for nearly 12 hours.

The girl was last seen by her mother at their home on the 8800 block of Oakdale Avenue in Northridge around 1 a.m.

The mother reported she noticed the girl’s bedroom door was ajar around 3:30 a.m. and searched the entire house before calling 911. Capt. Andrew Smith said police responded to the call and arrived at the home around 4:30 a.m.

“(She) had no indications of being a runaway, no troubles at home, no other issues or problems with the family, which kind of concerned us,” said Capt. Kris Pitcher.

The young girl was spotted sitting in some chairs in front of a Starbucks on the southeast corner of Canoga Avenue and Oxnard Street by an unknown citizen at 2:50 p.m.

The citizen then flagged down officers passing by. The girl was found barefoot and had bruises and cuts on her face.

“She was in shock,” Smith said. “We are caring for her physical needs right now. We have no idea how long she’s been here (the parking lot).”

Suspects include an 18-year-old white male and a second male, no further details given. The victim does not appear to have known them and was with one or both of them the entire time she was missing.

The LAPD Robbery-Homicide Division and FBI are currently investigating potential crime scenes named by the victim.

The victim was dropped off at a Kaiser Hospital on the corner of Burbank Boulevard and De Soto Avenue in Woodland Hills. She then walked about a mile to the Starbucks parking lot, said William Hayes, commanding officer of the LAPD Robbery-Homicide Division.

“We are receiving information as we get into the investigation and interview leading us to believe there are other crime scenes and evidence,” Pitcher said.

The victim named several other locations she had been taken to before the 12-hour ordeal was over. A clear order of events was not provided, but locations included a storage facility on Mason Avenue and Nordhoff Street in Chatsworth, an abandoned home in the 8800 block of Hatillo Avenue in Winnetka and a park that has yet to be determined, Hayes said.

A black pickup truck is believed to have been found at the storage facility, Hayes said.

The side-gate of the parents home was found open, but they said it was locked before they put the girl to bed and the doors were locked.

“Our concern is you have a 10-year-old taken from her home and held with these individuals for nine or 10 hours,” Hayes said. “Our goal is to ensure it doesn’t happen to anyone else. If these individuals were brazen enough to do that, I want to make sure they don’t do it again.”

Hayes and Pitcher said there was no reason for citizens to be more alert than usual.

“There’s no reason to suspect this has been happening anywhere else, ” Pitcher said. “Always be conscious of your surroundings lock your doors and have basic safety awareness.”