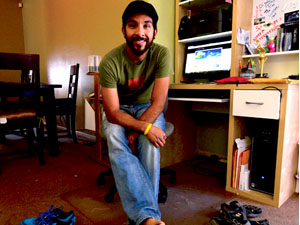 Raul Engle recalls when he was 7 years old, peeking out a window from a hospital room after almost drowning. According to his doctor, he almost died. Engle remembers the near-drowning incident. But most of all, he remembers what he saw out that window and how it changed his life.

“I remember looking outside my room and seeing a marathon,” he said. “It took me by surprise and I asked myself what was going on.”

He witnessed the city marathon during his stay in Children’s Hospital Los Angeles. And that glance out the window birthed Engle’s passion for marathons and fitness.

Engle’s interest in fitness led him to obtain a bachelor’s degree in kinesiology at CSUN, and then to share his treasure with others. His mission is to promote healthy life choices, which he believes can benefit a person both physically and mentally.

“Your health is everything. Without it you can’t do the things that you want to do,” Engle said.

The startup was challenging, as Engle wasn’t familiar with requirements for creating a nonprofit organization. Gaining recognition was another obstacle, but with help from his mentor and close friend Steven Loy, kinesiology professor at CSUN, he successfully established Happy Feat Running in late 2010.

Having a companion to help him along the way was a benefit for Engle. He remembered when he was part of Loy’s running program, the Marathon Completion Challenge. Being a member of the group motivated him to follow the model Loy set.

“Working with Dr. Loy is inspiring. I’m always learning something new from him,” Engle said.

The two collaborated together while they trained with participants in this year’s Los Angeles Marathon.

CSUN kinesiology students also work with the group to help with informative workshops that teach members the importance of stretching and injury prevention.

In addition to the marathon training group, the organization has other running programs as well. There is a 10K and 10-mile challenge, as well as a 30-day running group.

The organization has also started a program that works with grade school students called Kid Marathon Club. The 10-week marathon running program is offered to children of all ages, and all runners are allowed to join regardless of any disabilities they may have.

It was kids that gave Happy Feat Running its name. When Engle began working with young students, he was struck by the energy they possessed.

“I want to reinvigorate the same energy kids get when they run for fun,” he said.

Engle is determined to change the notion that running is “grunt work.” and demonstrate to everyone how enjoyable the sport can be.

There are currently 60 to 70 members in Happy Feat Running. Engle’s philosophy is that challenges are necessary for growth, so each week he pushes the runners to run longer distances while also improving their speed.

Mike Wong, a kinesiology major at CSUN, is happy to be a part of Happy Feat Running. He said being a member is a challenging journey that helped him mature due to the dedication it required. Wong also feels that he and his fellow runners have become a community of friends.

“You have supporters and you have people who you will support regardless of what your pace is,” he said. “The social environment this program fosters is something rare and special.”

Emily Seeboonruang is another runner who enjoys being a member. She said she believes it’s a great resource for anyone who is interested in completing a marathon. Her reason for joining was so she could challenge herself.

“I joined knowing that I was going to have the guidance from people who have had the experience and knowledge of running a marathon,” Seeboonruang said.

Happy Feat Running is located at Santa Clarita, but Engle is determined to branch out throughout the San Fernando Valley. He plans to collaborate more with CSUN students, staff, and alumni by allowing them volunteer opportunities.

To Engle, running is more than just exercise: it is a practice that can make a positive impact. Every marathon race is something new to runners, and he believes that crossing the finish line is different every time.

“It’s a symbol of commitment and progress,” Engle said. “I like to encourage other runners and myself to take on challenges in order to find where our bodies can take us.”