No ovaries, no abortion worries 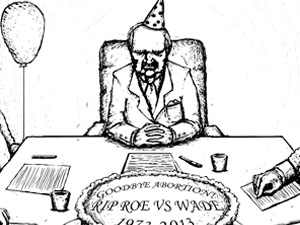 During Women’s History Month in the good ol’ United States of ‘Merica, one way lawmakers in several states have celebrated has been by passing as many anti-abortion bills as possible.

North Dakota, the star of the anti-abortion and anti-choice show, just banned abortions past six weeks of pregnancy through three bills–HB1456 requires a physician to check for a heartbeat before performing an abortion and makes it a felony to perform one if there is a detectable heartbeat;  HB1305 makes it a misdemeanor for physicians to perform an abortion based on gender or genetic abnormalities; and SB2305 requires abortion providers to be board certified or eligible in obstetrics and gynecology, have admitting privileges at a local hospital and “staff privileges to replace local hospital on-staff physicians,” and requires abortion facilities to have a staff member trained in “cardiopulmonary resuscitation present at all times when the abortion facility is open.”

North Dakota’s senate also passed a resolution that will reach voters in 2014, which would define life as starting from conception.

Arkansas, in second place for the most restrictive abortion laws, passed the Arkansas Human Heartbeat Protection Act, banning doctors from administering abortions after there is an audible heartbeat via an abdominal ultrasound, and completely restricts abortion past 12 weeks.

And the bronze medal for limiting women’s right to choose goes to Kansas. Though Kansas does not restrict abortion until 22 weeks, or about the end of a woman’s second trimester, a new bill in-progress, HB 2253 may actually be the most disturbing because it prohibits abortion even in the case of rape or incest and even if the victim is a child. It also complicates things for abortion providers, as it bars tax-breaks for providers, requires doctors to tell patients potentially inaccurate medical information about abortion (that abortion is linked to breast cancer, which it is not) and prohibits schools from using sex-education materials affiliated with abortion providers.

An honorable mention can go out to the New Hampshire House of Representatives, which passed a bill this month mandating abortion seekers to wait 24 hours before an abortion and also requiring doctors to tell women that abortion causes breast cancer (which again, it does not).

Expectedly, the majority of these bills have been coming from blue states, where the majority of their state government is made of old-fashioned, God-fearing men. The GOP has historically been the party to go to when it comes to sharing one’s anti-abortion views, and in the last two elections, their reputation as the “anti-women” party (as well as anti-minority and anti-LGBT) may have cost them crucial votes.

But surprisingly, many of the sponsors of the bills are women. Two of the North Dakota anti-abortion bills (HB1305 and HB1456) were sponsored by Rep. Bette Grande (R-Fargo) and the personhood resolution was sponsored by Sen. Margaret Sitte (R-Bismarck). The New Hampshire Bill was sponsored by Rep. Jeanine Notter (R-Merrimack) and the Arkansas six-week abortion ban was authored by nine women legislators.

Most of these women are registered as Republicans. If these women, who are actively participating in their local governments, are opposed to abortion, is it fair to call them anti-women? On the other hand, is it fair for women who are uncomfortable or opposed to abortion to eliminate that choice for women seeking abortions? Is the status of reproductive rights in a society the most important factor in measuring gender equality?

Perhaps the reproductive rights does not have to be as divisive as it seems. It is important for women on both sides of the abortion controversy to seriously consider the other’s view.

Conservative women who may or may not identify with strong Christian or religious values should open up to the ideas of feminism.  For too long, men have controlled the institutions of religion through patriarchy. It is definitely possible for feminism and religion, or, culture to coincide. It is also important that women against abortion realize that it may not be appropriate in a working democracy to eliminate the choice for other women.

However, this is a conversation that women and women only should be allowed to procure. Some would argue that men should have a say in debating abortion because they are part of the procreative process, but they definitely are not a part of the physical and mental process of birth.

Although abortion is a procedure that has solely to do with a woman’s body, men have led the crusade against it. The majority of these legislators are still men, and just because women are involved does not mean that these bills will not harm women.

Not too long ago, Todd Akin argued that if a woman was legitimately raped, “the female body is able to shut her body down” and thus not get pregnant or need an abortion. Recent video footage of Virginia Attorney General Ken Cuccinelli, who is now running for governor, captured Cuccinelli comparing the fight to ban abortion rights to the fight to end slavery.

If the G.O.P. really wants to be known as a party for women to be, Republicans need to seriously reconsider the role of men in the conversation about abortion and leave it to their conservative women. No amount of re-inventing the party’s image will be enough if women are not at the forefront of the reproductive rights conversation in their political spectrum.