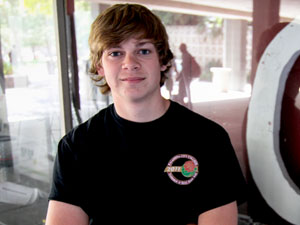 A group of five CSUN computer science students have won an international competition by creating an Android audio alert app that alerts those who are deaf or hard of hearing to dangers.

The competition, known as SS12: Code for a Cause, was held at the 28th Annual Technology and Persons with Disabilities Conference.

The students’ winning project “alerts a person who is deaf or hard of hearing of auditory disturbances, such as sirens and smoke alarms.” The app alerts them with vibrations, text messages and flashing lights.

Ismael Gonzalez, one of the five winners, said the app has the potential to help many.

“There will be times when (students who are deaf or hard of hearing) will be alone and they will be able to use the app to be notified of their immediate surroundings (for potential danger),” Gonzalez said.

Roz Rosen, director of CSUN’s National Center on Deafness, said that the application has potential to help the university’s deaf community.

The competition’s website invited the public to suggest new phone application ideas for students to create.

After the ideas were submitted, the application to assist those hard of hearing or deaf became one of nine possible projects given to the computer science students.

At CSUN’s SS12 competition on Feb. 9 and 10, the students were assembled into teams chosen by contest officials.

Gonzales’ team included himself, Matthew Newbill, Kyeong Hoon Jung, Chris Cederstrom, and Joshua Licudo. The team was assigned to create the alert application. The group had 24 hours to create a plan before presenting it to judges.

During the group’s planning time, they had help from a mentor who had experience in the computer science field to help formulate a plan for the application’s development.

After SS12, the winning team had a week to make changes or further develop their application and submit it to Github.com, an open source code control website, for the international final stage of the SS12 competition.

The competition in San Diego included three U.S. schools: CSUN, USC and UCLA. Foreign universities that also participated included University of Dundee in the United Kingdom, Technical University of Kosice in Slovakia, Johannes Kepler University Linz in Austria, Masaryk University in the Czech Republic and Utrecht School of the Arts in the Netherlands.

“After experiencing everything in the competition, it opened up my eyes to the developer world,” Newbill said. “Whenever I develop, I think about the competition. Everything I do now is based on access. It’s changed how I develop.”

Newbill added that he hopes to broaden the usefulness of the application to more people who are deaf or hard of hearing.

Rozen said the people who are deaf and hard of hearing at CSUN are looking forward to trying out the application and being involved in further technological developments as consumers of these services. She said the community may suggest other ideas to CSUN’s computer students.

“This is not surprising, given that CSUN has had exemplary programs for students who are deaf and hard of hearing who are American Sign Language users for more than 50 years,” Rosen said. “We are delighted that our CSUN students and professors took an interest and pursued this initiative to ensure a safe environment for everyone, including people who are deaf and hard of hearing.”

At the CSUN SS12 competition, students used free software provided by the university such as Eclipse, which is an integrated drive electronics (IDE) that “is able to compile and run Android programs,” and Android automated programming interface (API), which helps communication between software components.

The winning mobile application is only available on Google Play, which is the Android application store. It is free to download.

Neither CSUN or the students who created the application will make any profit from the application, because it was produced through a collegiate competition.