‘Adventure Time’ might not be the right show for kids 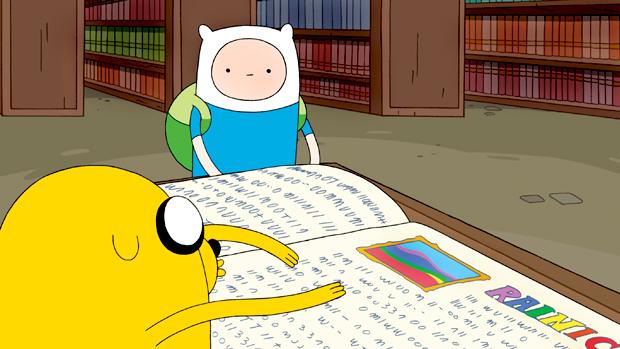 There used to be a time when, in college, if you told someone you watched a show about rainbow unicorns and candy princesses, you’d be stuffed in a locker and ostracized well-past graduation.

Today, it makes you the coolest kid on the block.

“Adventure Time,” a show about a boy and his elastic yellow dog, has taken hold of young and old audiences alike since its inception in 2010. In the ludicrous and post-nuclear war Land of Ooo, everything a child could imagine, from wizards to vampires to candy castles, is brought to life through the Cartoon Network venture. Inversely, the show’s underlying dark themes and off-color humor draws in the 18 and up crowd. However, what makes it appropriate for one demographic is precisely what makes it questionable for the other.

Case-in-point: in one episode, Finn the human and Jake the dog venture to Earldom, which is governed by a pair of lemon-headed characters created by Princess Bubblegum (sounds innocent enough). These Lemongrabs, as they are known, face deathly famine after having used all the kingdom’s food to bring life to mutated clones of themselves, generated from a god-like formula left behind by the princess-turned-scientist when she conceived them.

Or take, for example, a more recent episode: Finn invites the Flame Princess on a date to go dungeon exploring. As the pair battle skeletons in pursuit of the key to a treasure chest, they descend deeper and deeper into the hellish catacombs. Once they near the center, a winged skeleton launches itself out of a locked vault, desperately begging the Flame Princess to “take its place,” which she proceeds to burn. For what it’s worth, this series of events has apparently little to do with the advancement of the main plot.

In a show with a market demographic of kids 6-14, such hauntingly arbitrary elements raise the question: who exactly is the show intended for, and what is it trying to say?

Creator Pendleton Ward has described his storyboarding process as “unexpected.” In a Cartoon Network Q & A, he said that he has forgotten pending situations while writing, such as a knife storm, and instead of reworking the story-line, will use spontaneity to carry on. This no-eraser way of animating lends itself to the show’s signature style of discontinuity. Often episodes, which last a mere 11 minutes, have anti-climactic non-endings that leave the viewer asking, “What the fuck did I just watch?”

Ooo’s origins are hinted at throughout the series as fallout from nuclear warfare. This Mushroom War, as it’s known, supposedly wiped out the human race and gave rise to the candy creatures and other mutated species. While not explicitly emphasized, this recurring allegory for our actual potential to destroy each other highlights the show’s capability to go beyond fantasy and serve as a satire of reality.

Though most Easter eggs and innuendos may go over children’s heads, the program is aired during Cartoon Network’s regular primetime programing instead of its grown-up oriented Adult Swim. Phrases like “Mathematical” and “Oh, my glob” are used to substitute for swear words, and a cheery, 8-bit inspired soundtrack guides the heros even through the darkest of  adventures. The slap-stick animation can satisfy the most distractible of children, making it almost unpalatable for adults.

However, over 300,000 “deviations” with the tag “Adventure Time” have been uploaded to the art-sharing site Deviantart.com, which doesn’t allow users under 13 years old, right at the threshold of the target demographic. The most dedicated, and in turn, the most consumeristic, fans are over 18. Instead of making merchandise for only children, Cartoon Network has licensed out the Adventure Time image for adult shirts, backpacks, hats, wallets, action figures and even onesie pajamas. The unofficial, fan-made merchandise gets even weirder.

In a time when nostalgia reigns supreme (see Instagram), it’s understandable why adults may want to revisit their childhood through a cartoon for grown-ups. Where shows like “Family Guy” and “American Dad” fail to create sentiment, “Adventure Time” jumps in with infantile innocence and the right amount of twisted humor to lure in even the most discretionary man-child. This formula seems to work across networks, à la the Brony phenomenon, and has struck a particularly strong chord with fans of Finn and Jake. However, when post-apocalyptic death and peril become increasingly recurring themes, it might be appropriate to reevaluate its suitability for those whose age doesn’t surpass the number of episodes in a season.