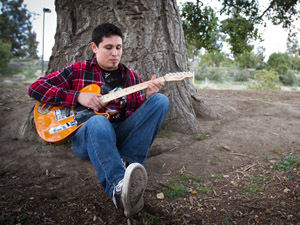 The world is a place filled with people from different cultures and religions.

Outside of the classroom, Cabral uses his knowledge to be a more whole person with a more comprehensive understanding of people from other nations and faith traditions—even at his retail job at Faconnable, a men’s and women’s clothing store in the Camarillo Outlets.

“I guess I use [religious studies] in how I approach people, how I deal with it at work,” he said. “I work at a place where there are a lot of international people there so I have a respect for them. Whereas, I would say the majority of people who don’t have a religious studies background, they would be more nonchalant about it. Say a person comes in with a turban, they’d say, oh, they’re probably Muslim, but it’s not really. They’re Sikhs.”

Learning about Islam was something that Cabral was very interested in, ever since the September 11 attacks.

“I was in high school during the time and I was actually considering joining the military, but then after a while I looked into myself and asked ‘Why am I so angry?’” he said. “And after a while I was just like, ‘They’re people, too, you know.’ They wouldn’t attack us if they didn’t have a reason to.”

Cabaral is also a guitarist and dedicated time for self-reflection. Playing his guitar was a way of soul searching, an introspection through the ritual of musical practice, a sort of quasi-meditative state.

It was the routine of strumming his guitar, writing songs, melodies, that he found inner-peace. Cabral stopped himself from joining the military after reflecting on these critical questions.

Years later, he decided to study other people’s cultures and worldviews instead.

“We learn about religions, not just one religion, but all major religions, such as Hinduism, Buddhism, Judaism, Christianity, Islam and array of others,” Cabral said.

Students that major in religious studies are not all people wanting to be priests or ministers, he said.

One doesn’t have to be religious to want to pursue religious studies. Atheists make some of the best well-rounded experts of religion—even more so than actual practitioners of religions—since they tend to do a heavy amount of research and study, Cabral said.

“[Atheists] do their own soul searching,” he said. “They pretty much study all religions to see which one is the right one for them. It’s not that they don’t believe in a higher being. They could be spiritual… Religions revolve around a structure, a hierarchy of organization. Being spiritual is more on the individual.”

For anyone interested in learning more about the individual and the world simultaneously, religious studies is an appropriate area of study.

“I was always open-minded about the world but just that I’ve been raised to have a certain view of the world, but I’ve always wondered about the world,” Cabral said. “Religious studies offered me sort of solutions and a pathway to understanding the world.”